Machines Italia: SpinningMarzoli S.p.A. has several US ring-spinning installations, but the
company indicates it has shifted its focus to Iran, Syria, Turkey and China. Additionally, Marzoli
now operates a joint venture to manufacture ring-spinning frames in China, resulting in huge
reductions in manufacturing costs. Spindle prices of $230 in Italy versus $42 in China are given as
broad cost comparisons for non-automated machines.While Marzoli manufactures a full range of
cotton-spinning machinery, the companys major news is its entry into the compact-spinning arena.
Marzolis Olfil system can be retrofitted to its existing machines, and consists of an extra zone
after the normal front rollers of the drafting system. Upon leaving the drafting system, the strand
is supported on a perforated apron before passing through an extra front roller, which is
belt-driven by the drafting roller. In this additional condensing zone, suction through the
perforated belt creates tension in the fibers and results in a tighter yarn structure. Benefits
include a 15- to 20-percent reduction in hairiness and a 10-percent increase in tenacity. Marzoli
is promoting the Olfil system for processing cotton and, particularly, finer counts (24-80 Ne) for
combed fibers. The company indicates there are problems with coarser yarns and short fibers, and
higher trash levels have a big impact on productivity. The system, marketed as an approach to
improving yarn quality rather than high productivity, is sensitive to temperature and humidity.
Sticky cotton is particularly problematic. 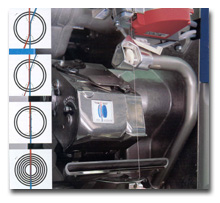 Savio’s Twinsplicer is just one of the many splicing units that can be supplied with Savio
winders.Modern Spinning PlantA visit to Giemme Filati S.p.A., coordinated by Savio Macchine Tessili
S.p.A., offered a look at some of Savios latest developments, as well as a discussion with Giemme
Filatis president, Giovanni Muratori. Giemme Filati is a modern spinning plant with 10,000 spindles
for cotton yarns, plus three machines for core-spun elastomeric yarns. All machines are equipped
with Savio ORION I link winding. The company also has facilities for twisting, singeing,
mercerizing and dyeing (6,800 pounds per day for socks and high-quality underwear). Giemme Filati
also owns a spinning mill in Paraguay. A major concern for the company is the competition from
imported yarns. To offset the variations in pricing between in-house yarn and yarn imported from
India, Giemme Filati not only spins 16,000 pounds per day, but also finishes 20,000 pounds of yarn
sourced from India, Russia and Egypt (40s to 80s Ne).Savio has had recent success in the United
States with sales of winding machines and installations of rotor-spinning and Espero Volufil
bulking units for acrylic yarns. The Italian textile industry has seen a major downturn, and 90
percent of Savio machinery is exported, with the largest market presently being China and Turkey.
Three developments were highlighted. Various types of splicing units can be incorporated into the
winder. Of particular interest is the Twinsplicer, a mechanical system that can splice not only
denim yarns, but also compact and core-spun elastomeric yarns. The splicing of elastomeric yarns
was demonstrated in the spinning rooms at Filati.A system has been developed to identify the
spindle that produces the yarn being wound on the link-winding machine. Because there is a package
transfer system in the passage of the spinning tube to the winder, it is necessary to communicate
the new location to the tracking system. It is believed the use of such systems should greatly
improve the identification of spinning positions that are producing defective yarns and thus may
need maintenance. Savio is set to launch a rotor-spinning machine that uses a spin box from
Spindelfabrik Suessen, Germany, instead of its traditional self-pumping rotor. This should enable
significantly higher production speeds. Suessen has been very active in improving its components to
enable the production of higher-quality yarns.Long-Staple ProcessingSantAndrea Novara S.p.A. is,
along with Cognetex S.p.A. and Seydel, part of the Finlane Group. SantAndrea has been a significant
player in the manufacture of machines for long-staple processing, and in particular for the
processing of fine wools. Its major markets currently are China, Turkey, Italy, Mexico and Iran.
The group claims to be the largest manufacturer of long-staple processing machinery. While
SantAndrea does not manufacture spinning frames, Cognetex offers a range of machines. Thus, the
group can provide turnkey operations. The major developments presented by SantAndrea follow. The
new P100 comb operates under a new combing law. Main features include continuous feed, simplified
design and increased operating speed. The comb has been designed with minimum motion of the various
components. Not only does this afford potentially higher speeds, but it also has resulted in
significant improvements in setting times for the various units within the comb, coupled with
easier and quicker component change.The HC 22 ARE pin drafter (Chain Gill) twin-head drawing frame
is equipped with double electronic autoleveling. As well as having the more usual open-loop system
to measure and correct the feed, this machine also is equipped with the Tex-Detector closed-loop
system, which measures and corrects the outgoing sliver. Additional features of note are the
30-millimeter (mm) front ratch of the drafting system and the reduced distance of 4 mm between
successive rows on intersecting pins in the drafting zone. Both of these modifications should lead
to improvements in sliver quality. 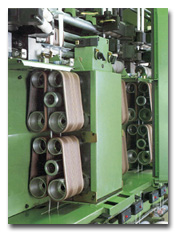 A second rubbing zone on Sant’Andrea Novara’s RF4 Vertical Rubbing Finisher reinforces “dead
centers.”SantAndrea claims 80 percent of the world market share for vertical rubbing frames. The
RF4 Vertical Rubbing Finisher is its latest version. The use of a double rubbing field doubles the
amount of rubbing at a particular running speed, and thus the rubbing section can potentially run
at a lower oscillation rate to maintain an acceptable compaction of the roving. In addition, the
second rubbing zone can reinforce the dead centers that occur at the reversal of the rubbing aprons
when only one apron set is used.Compact Spinning CentersCognetex currently has about 45 percent of
the world market for long-staple ring frames, with Turkey accounting for about 50 percent of its
sales. Its major focus recently has been the development of a compact spinning system for worsted
spinning. The Com4® Wool system is the result of significant development based on Rieters Com4
system for cotton fibers. Major changes have been made to accommodate much longer fibers. This is
achieved by utilizing angled balloon rollers as the front rollers in the compacting zone. The usual
benefits for compact yarn are gained with this system improved hairiness, regularity, strength,
elongation and abrasion resistance. However, the claimed advantages are associated with the impact
of these benefits in subsequent processing. One particular claim is that it may be possible to
replace folded wrap yarns with a single Com4 Wool yarn. The system is incorporated into a machine
using suppressed spinning balloons claimed to work well in conjunction with the compact drafting
unit. An additional cover, termed the air conveyor, is used for certain fiber types. It is
recommended for use when processing cashmere, but is said to be unnecessary for wool.Spinning Plant
AutomationU.T.I.T. Wagner Automazioni S.p.A. operates as a design and assembly company. It sources
parts and components and then applies minor modifications to ensure a unified system. The company
presently works either directly with the customer or through a machinery maker. The company offers
many forms of material handling for different areas of the textile industry and is particularly
well-known in staple spinning. Systems offered include:bale handling; transport systems for sliver
cans, comber laps and rovings;complete material handling systems, from spinning/winding through
palletization;filament-package handling; andtextile roll handling and palletization.U.T.I.T. has
several installations operating in the United States, particularly can and roving transport, and
yarn-package handling systems. The latter systems can accommodate output from up to 23 machines.
The setup includes automatic package assessment for diameter, weight, conicity and yarn tail. It is
possible to handle different yarns from the different spinning machines feeding the system.
Research is underway to track the spinning position that is producing any defect detected by the
package inspection system.Gualchierani Textile Automation S.p.A. has two main areas of focus bale
presses (including presses for making bump tops) and automation. The company proudly explains the
project planning, research, construction and installation are all conducted in-house. Its major
sales are to the Czech Republic, Turkey, China, India and South America.Gualchierani currently has
interests in the following areas of material handling:robotic plants for partially oriented yarn,
fully drawn yarn, bulk continuous filament, and other yarns from spinning through inspection to
palletizing and storage, including package inspection and labeling;staple processing automation
from spinning and winding through boxing and palletizing;handling of packages in the dyehouse;
andwarehouse automation and associated logistics.
June 2003