Eighth Rate Cut Not Likely To Be Last

Evidence from the latest set of economic reports shows the U.S. economy weakened further in
August, and in the aftermath of the terrorists’ attacks, a recession is likely to be already in
progress. On the bright side, consumers keep spending, and the Federal Reserve stepped in with a
one-half-point cut in short-term interest rates. Further rate reductions are likely to follow to
prevent the economy from going into a deep recession.

The jobless rate increased to 4.9 percent in August from 4.5 percent in July. This climb was
the sharpest monthly increase since early in 1995. Nonfarm payrolls declined by 113,000, despite a
gain of 72,000 jobs in the service sector. Since March, total nonfarm employment is down by 323,000
jobs. With factory output down and a declining business investment, manufacturers slashed 141,000
jobs in August, bringing the total losses from a year ago to more than one million jobs.
Manufacturing employment is at its lowest level since 1964 — a sign that the weakness in U.S.
economic activity has turned into a recession. 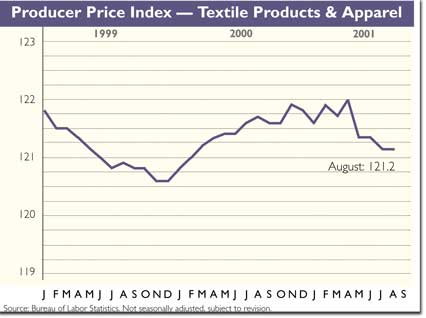 Industrial production dropped by 0.8 percent in August, after edging down 0.1 percent in
July. July’s figures had raised hopes that manufacturing was on the verge of a rebound. The monthly
decline was the 11th in a row, matching the longest stretch of industrial output weakness, which
occurred in 1960. The operating rate of industrial capacity fell to 76.2 percent from 76.9 percent
in July, the lowest level since July 1983.

in June. Both exports and imports declined, reflecting economic conditions in the U.S. and
abroad. Exports fell 2.5 percent to $83.73 billion, while imports came down 2.1 percent to $112.56
billion.

Business sales bounced 0.4 percent in July, after falling 1.5 percent in June. Meanwhile,
business inventories eased 0.4 percent. As a result, the July inventory-to-sales ratio edged down
to 1.42 in July from 1.43 the previous month.

Producer prices of textiles and apparel were unchanged in August after edging down 0.1 percent
in July. Prices jumped 1.9 percent for greige fabrics and rose 0.2 percent for home furnishings.
However, prices came down 0.4 percent for processed yarns and threads, fell 0.9 percent for
finished fabrics, declined 1.0 percent for synthetic fibers and dropped 1.3 percent for carpets.

Shipments by textile producers declined 0.8 percent in July after rising 1.7 percent in June.
Inventories were pared down by 1.3 percent. As a result, the inventory-to-sales ratio edged down to
1.66 from 1.67.

U.S. retail sales rose 0.3 percent in August, paced by sales gains of 1.2 percent at gasoline
stations, 0.9 percent at building materials and supplies stores and 0.6 percent at department
stores. Sales eased 0.2 percent for motor vehicles and parts and edged down 0.1 percent at
furniture and home furnishings stores. At apparel and accessory stores, sales declined 0.8 percent
in August after rising 1.0 percent in July.