MILAN — February 14, 2012 — Orders for Italian textile machinery manufacturers were on the rise
again during the last quarter of 2011 after two quarters of fall down. The results were gathered by
the quarterly survey conducted by ACIMIT, the Association of Italian textile machinery
manufacturers. Overall orders for the period from October to December 2011 rose up 28% over the
previous quarter, at a value of 90.2 points. The most significant increase regarded orders in
foreign markets (+32%), whereas on the domestic market orders were up 15%.

“We’re still far from the levels achieved in 2010,” comments Sandro Salmoiraghi, President of
ACIMIT, “but this recovery, compared to the mid months of 2011, confirms the dynamic nature of our
manufacturers.”

“Despite the current difficult conditions in global markets,” Salmoiraghi says “our
manufacturers have managed to catch the business opportunities available in major foreign markets,
especially China, Turkey and India, as well as the United States and Brazil.”

The situation on the domestic market remains more difficult to resolve, however.
The revival in investments recorded over the past three months is certainly a positive sign, but
the gap remains large with current trends abroad.

The expectations of Italian machinery manufacturers for the first quarter of 2012 remain
cautious, above all regarding the domestic market. “Economic uncertainty, combined with increased
difficulties due to the danger of a credit crunch, are stopping investments of our Italian
customers,” ACIMIT’s President concludes. 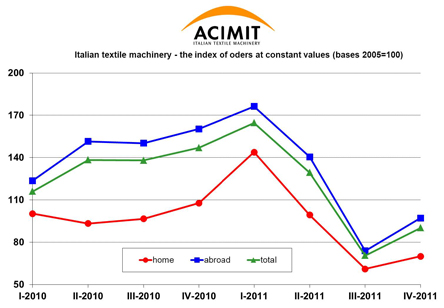