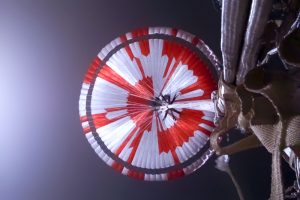 TIVERTON, England — April 21, 2022 — England-based textile manufacturer Heathcoat Fabrics has been recognized with a prestigious Queen’s Award for Enterprise for Innovation.

The company developed a high performance parachute fabric that has contributed to outstanding commercial success, including delivery of NASA’s Perseverance Rover onto the surface of Mars in February 2021. Heathcoat Fabrics is among a list of 51 companies who have received the innovation award.

The innovation has opened the door to other niche space exploration projects, including returning cargo and astronauts from the International Space Station and ensuring the safe splashdown of a capsule containing the first all-civilian team to orbit the Earth.

“We make hundreds of different fabrics for many markets, from apparel to automotive components. We have been a pioneer in manufacturing parachute fabrics since the 1930s. When we met NASA at a symposium in 2015, they saw the potential of a new fabric we had developed and we began trials a year later.

“NASA’s standards have been challenging to say the least. The fabric needed to be twice the strength of standard fabric, within a tight air-permeability window and able to withstand extended heat treatment. The fabric underwent a series of wind tunnel, land-based mortar and sounding rocket tests after which the fabric was selected and used for the successful Mars mission. The fabric even needed to be baked before any rocket was launched, to avoid sending bacteria or micro-organisms to another planet.

“By the nature of the yarn, it is difficult to weave and finish, and it needs to be perfect. There is no second chance opportunity on landing a multi-million dollar space probe. From our investment in high quality looms to the chemistry developed to give the fabric its specific properties, this has been a huge task over a number of years.

Harvie added: “The Heathcoat brand has historically been recognized for highest quality in textiles. This includes providing the veiling fabric for Queen Elizabeth’s royal wedding in 1947, and it’s fitting in her jubilee year that she has personally approved our Queen’s Award for Innovation.”

Eleanor Newsome was instrumental in creating the original concept fabrics for NASA and developing the final product used for Mars2020. She is now leading a development team for automotive and industrial belting fabrics with a focus on achieving energy-saving in drive systems.

Lotte De Leeuw is a development engineer in woven fabrics, and is continuing the work in parachute development working with all of Heathcoat’s space customer development teams for current and planned missions.

Peter said: “The team has excelled, working tirelessly with NASA and others to ensure Heathcoat was able to deliver on their requirements. Our development engineers are at the forefront of new and exciting textile technologies in space exploration that have gained global recognition, as well as other developments within our business including sustainable/renewable fabrics, and hydrogen generation for renewable energy systems.”

The Queen’s Award for Enterprise is now in its 56th year and is widely recognized as the most prestigious business award in the United Kingdom.