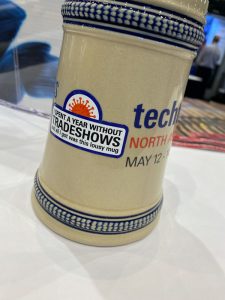 Editor’s note: What follows is an initial brief review of Techtextil North America 2021. For a full review of the show, be sure to read Textile World‘s September/October 2021 issue.

Aside from attendees trying to figure out whether they should shake hands, fist bump, elbow bump or “other” when greeting colleagues, and despite the mask mandate putting off a few attendees, the 2021 Techtextil North America show held in Raleigh, N.C., over the past three days met or exceeded expectations for visitors and exhibitors alike. Many of the exhibitors Textile World spoke to had initial trepidations on how this year’s show would play out, however most offered very positive reviews.

“We really didn’t know what to expect, but the show has been good for us, busier than expected” offered Datatex’s Shannon McCarthy.  “We’ve had good volume and a good quality of visitors to our booth.”

“We had 30 customers visit the booth on Monday, and I had said coming into this that if we had 30 customers over the course of the three-day show, it would be worth exhibiting,” said Brenda Stamboulian, Jason Mills LLC. “So, we are very happy.”

“There really weren’t any expectations for this show because of everything happening around us, but I’ve been pleasantly surprised with the turnout,” added Franz Geppert, Monosuisse North America.  “Each day has provided a consistent flow of existing and potential customers, which gave us enough time to hold good conversations and make some good contacts,”

“It’s been a surprisingly good show and turnout,” said Lou Ott, Gentex. “It was good to be face-to-face with people for a change without having a Zoom screen between us. And also having the time to catch up with friends and acquaintances — where they are, how they’re doing and all those personal things that you don’t have the opportunity to do on a zoom call — was great.”

Many attendees noted this was their first entry into the real world again after being cooped up at home or travel restricted because of the COVID-19 pandemic. Though some said they were a bit hesitant to attend, they enjoyed being in a show environment for the first time in 18-plus months. “It’s been great to be out and about again” stated Ernest Sumner of A.B. Carter. “We’ve been able to see and meet a lot of people that we hadn’t been able to catch up with or wouldn’t have known about had we not been here in Raleigh. We didn’t know who we needed to see until we saw them!”

“Shows are a pain in the neck, but so worth it,” said Steve Aranoff, Zund America Inc. “As someone who has participated on both sides as an exhibitor and an attendee, it’s hard to say which option is best. But we are such social characters. If I didn’t wander the show floor, I wouldn’t have met certain people to have conversations with and wouldn’t have learned what they know without engaging in that conversation.”

The symposiums associated with Techtextil North America also were interesting and well attended, leading to some lively discussions on sustainability, supply chain issues and concerns, and in several cases, the art of surviving in a pandemic.

And of course, the after-show meetings, gatherings and socializing — where many members of the industry acknowledge is where much of the business actually gets done — were numerous and varied.

The general conclusion after the three-day event is that Techtextil North America 2021 met, or exceeded, most expectations and offered a much-needed positive start as the textile world emerges from a rough year and a half. Here’s to continuing that momentum forward!