B
icomponent melt-spun fibers were first commercialized in the middle of the 20th century,
in the form of fibers with sheath/core and side-by-side cross sections
(See Figure 1). Very quickly, a primary application for the sheath/core bicomponent cross
section evolved: By employing a lower-melting-temperature (Tm) polymer in the sheath and a
higher-Tm polymer in the core, these fibers could be used in nonwoven webs to thermally bond the
webs together without losing the fiber shape of the binder fiber. This allowed more bond points,
which improved fabric strength and allowed for increased line speeds. 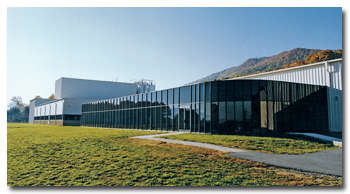 Since that time, sheath/core binder fibers have become widely accepted and have set the
stage for the introduction of bicomponent staple fibers, tows and filament yarns with a wide range
of enhanced performance features offered by more advanced bicomponent technologies. An important
step forward in the commercialization of some of the more advanced possibilities was the invention
by Melbourne, Fla.-based Hills Inc. of a process for producing spin pack parts using photochemical
etching. This advance increased the fineness and precision of control over polymer flow paths and
did so while simultaneously reducing the cost of the parts. Subsequently, Fiber Innovation
Technology, Inc. (FIT) was established in 1996 in Johnson City, Tenn., as a specialty fiber
producer not controlled by any polymer producer having a single-polymer, commodity focus. With
access to all available thermoplastic materials, and using the Hills technology, FIT has been able
to pioneer a large number of different bicomponent fiber types in a wide variety of applications in
a relatively short time. As a result, fiber consumers now have access to commercial supply of an
almost endless variety of bicomponent fibers, with an exponentially larger range of performance
features than when the simplest bicomponent fibers were first introduced. 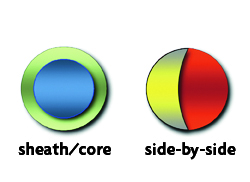 Figure 1: Fibers with sheath/core and side-by-side cross sections were the first bicomponent
melt-spun fibers to be commercialized.


Today, the choice of polymers used in a bicomponent fiber is not restricted to a handful of
commodity polymers such as polyethylene terephthalate (PET), nylon, and polypropylene (PP).
Instead, the entire range of polyesters – including polycyclohexanedimethanol terephthalate,
polytrimethylene terephthalate, polybutylene terephthalate, PET glycol and a huge range of
copolyesters – is being augmented by aliphatic polyesters such as polylactic acid and
polyhydroxyalkanoates, which introduce the new environmental benefit of being derived from
renewable resources. Similar range extension is now available with polyamides and polyolefins
including nylon 6, 6,6, 11 and 12; copolyamides; high-density polyethylene (PE); linear low-density
PE; syndiotactic PP; and polymethylpentene. But perhaps the most intriguing new possibility is the
incorporation of engineering polymers, whose properties are typically exceptional but whose cost
has traditionally prevented any investigation of use in commodity fiber applications. The list of
these polymers is long, and includes polyphenylene sulfide, acetal, ionomers, polyvinyl alcohol,
polyetherimide, and thermoplastic polyurethanes, to name just a few.

Added to the newly-expanded polymer choices is a much greater variety of bicomponent cross
sections made possible by Hills technology and some pack-part innovations by FIT. Now it is
possible to put the polymers pretty much wherever desired in the fiber’s cross section
(See Figure 2).

Figure 2: Bicomponent fibers can be manufactured in a wide range of polymer configurations,
such as those shown above, thanks to technology developed by Hills Inc. and some pack-part
innovations developed by FIT.

And it’s no longer necessary to limit the choice to round fibers.  Shaped-cross-section
fibers can also be coextruded using two polymers
(See Figure 3).

Figure 3: Bicomponent fibers also can be extruded in a variety of shaped cross sections,
including those shown above.


Finally, the entire range of polymer additives that can be used in single-polymer fibers can
also be used in one or both of the polymers in a bicomponent fiber to achieve targeted performance
characteristics. These additives include such things as colorants, flame retardants,
antimicrobials, conductive materials and carbon nanotubes, among other additives.

With this very large matrix of material properties and ways of combining them into each
fiber, it will be apparent that bicomponent fibers are no longer a one-trick pony. Whereas in the
past, fabric design meant trying to optimize the fixed attributes of a commodity fiber into each
different application, bicomponent fibers now offer a way to engineer finely-tuned performance into
the fiber. Each application can now seek a fiber that is precisely tailored to fit the specific
needs of that application.


There are far too many different end-uses for bicomponent fibers to cover in a brief
article, but a few illustrative examples are discussed below.

Even the basic sheath/core binder fiber has been updated since the early days. Today, there
is access to a range of copolymers of polyesters, polyamides, and polyolefins that allow precise
targeting of the desired thermal bonding behavior. The bonding temperature can be set from a low of
about 110°C to a high of about 180°C. It is even possible to select bonding polymers outside this
range, but these options can impose significant caveats. Beyond the bonding temperature, the
adhesive character of the bonding polymer can be adjusted to adhere better to polar surfaces or
nonpolar ones. And the crystalline nature of the polymer can be adjusted to give a broader or
narrower melt-temperature range. Binder fibers for high-loft nonwovens used as seat cushions in
place of polyurethane foam use a sheath polymer with elastic recovery, so that repeated stressing
of the bond points does not fracture the bond.

The fundamental sheath/core cross section is also useful in many applications demanding
engineering polymers. Typically, such an application depends entirely on the surface properties of
the more exotic, and more expensive, polymer. In these cases, the fiber’s core can be made with a
suitable lower-cost polymer to deliver all of the benefit of the more expensive polymer at a
materials cost well below that of a fiber made from the surface polymer alone.

Side-by-side bicomponent fibers typically rely on the difference in shrinkage between the
two polymers. At any point in the fabric formation process, if the fibers are not physically
constrained, shrinkage can be induced by the application of heat. Since the two polymers shrink at
different rates, the fiber resolves the resulting tension by curling into a helix. This behavior
allows a fabric to be made flat and then bulked when and where it suits the application.

The pie wedge cross sections typically are used to make microfibers. Direct spinning of
microfibers is difficult – and practically impossible below about 0.3 to 0.5 denier per filament
(dpf) – and expensive, as throughputs are low. But a 2- to 3-dpf pie-wedge fiber does not suffer
throughput limitations, and is robust through fiber and fabric production processes. Once a
nonwoven web is formed from these fibers, it can be subjected to mechanical agitation – typically,
a hydroentangling process – which will split the segments into microfibers – typically, about 16
segments per bicomponent fiber. The result is a microfiber fabric at significantly reduced cost
compared to one made using direct-spun microfibers.  The hollow and partial-wrap versions of
this cross section are refinements that allow adjustment of the fiber’s relative splittability.

The sea/islands cross section also generates microfibers. In this case, the sea polymer can
be easily removed by dissolution in a suitable solvent – typically, a light, hot caustic bath or
warm water. A fabric made of sea/islands fibers is passed through the solvent, and the result is a
microfiber fabric. This approach incurs a cost penalty because some of the fiber is washed down the
drain. But the smallest microfibers from sea/islands technology are much smaller than those
achievable using mechanical splitting technology.

The taggant cross section is one that FIT initially developed just to show off its
capabilities. But since then, the company has discovered that the inclusion of a logo or some other
complex shape in the fiber’s cross section can be of value in taggant fibers for applications in
which liability protection is desired. The logo can even be a two-dimensional barcode that can be
read by a machine vision system, thereby stealthily incorporating large amounts of information into
a product. The tagged product need not be a fibrous product, but can include electronics,
pharmaceuticals, gemstones, explosives, or virtually anything used in an application in which
forensic identification could be of value.


Of course, this is not the end of the story. Innovation will continue and build upon the
advances that have brought the technology to this stage. Already, tricomponent spinning systems are
being developed to coextrude three different polymers into each fiber rather than just two. And
some of the simpler bicomponent cross sections are appearing in spunbond fabrics, in which
filaments are extruded directly into a nonwoven web without forming fibers as an intermediate
product. The precision of polymer control to form the cross section also continues to advance. When
FIT was first formed, the state of the art was 37 islands in a sea/islands fiber, which could
produce microfibers as fine as 0.02 dpf. In recent years, Hills has produced spin packs capable of
stuffing hundreds of islands into each fiber cross section, which enables the production of
submicron microfibers. There is even one sea/islands cross section with close to 10,000 islands.
And before electrospinning technology even makes it out of the cradle, researchers are beginning to
experiment with bicomponent electrospun filaments, using polymer solutions rather than polymer
melts.

It will be necessary to wait for some of these advances to become widely available, but with
the state of bicomponent technology available today for commercial production, there may no longer
be any need to wait for a staple fiber or filament yarn that offers the exact performance a
particular application requires.