The nonwovens industry is using a greater diversity of processes and materials to meet the demands
of its market segments. This statement is supported by the fact that, at the Nonwovens Technical
Conference (INTC) in September – sponsored by the Association of the Nonwoven Fabrics Industry
(INDA), Cary, N.C., and the Technical Association for the PulpandPaper Industry (TAPPI)
International, Norcross, Ga. – the largest concentration of process technology papers focused on
the meltblowing of polymers. Additionally, there were a number of presentations on hydroentangling
and spunbonding. Virtually every process in nonwovens – with the exception of stitchbonding – was
extensively covered.The abundance of such dissertations on process technologies reveals a number of
trends within the industry, such as the growing use of bicomponent fibers. As well, it seems there
is a tendency to use a wider range of polymers and technology combinations to develop new nonwoven
products. Furthermore, there is much stronger interest in nonwoven research and development by
academia, evidenced by the fact that more than one-third of the papers presented at the Baltimore
conference were from colleges and universities.The lead-off paper at the conference was prepared
and presented by Dr. D.K. Smith, principal, Smith JohnsonandAssociates, Salt Lake City. His review
covered U.S. patent activities by company, country and process technology from the years 1996
through 2000. These 403 patents were examined and classified according to the claims and were
assigned to a specific nonwoven technology
(See Figure 2). 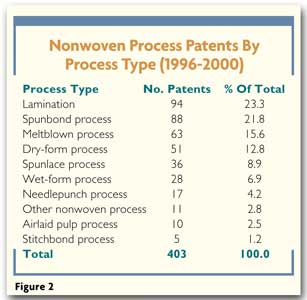 Meltblowing TechnologyMeltblown nonwovens now play a key role in the nonwovens
business, finding use in products ranging from diapers, surgical wraps, protective clothing,
filtration and spill-control procedures.Such products and applications have obviously come a long
way since Van A. Wente of the Naval Research Laboratory, Washington, first produced meltblown
microdenier fibers from organic polymers more than 35 years ago. Meltblowing of polypropylene and
other polymers was further advanced by Dr. Robert Buntin and his associates at Esso Research (now
Exxon) Laboratories in Baytown, Texas, in the mid-1960s and early 1970s.An important development in
the recent history of bicomponent meltblown technology was discussed by John G. McCulloch and John
Hagewood, Ph.D., of Hills Inc., West Melbourne, Fla. Hills installed a 20-inch bicomponent
meltblowing die, which was incorporated in the pack of the Hills spunbond bicomponent pilot line.To
date, Hills has demonstrated the production of the following types of bicomponent meltblown
products:meltblown sheath/core 50/50 polyethylene (PE)/polypropylene (PP);meltblown side/side split
fibers PE/PP;meltblown side/side trilobal poly(butylene terephthalate) (PBT)/PP;meltblown
sheath/core 10/90 PE/PP; andsegmented pie poly(ethylene terephthalate) (PET)/nylon 6.Product
possibilities for bicomponent meltblown nonwovens include:respirators;heat and moisture exchangers
for medical uses;improved filtration media;formation of filter and wicking rods by in-line pellets
to rods process;radiation-resistant medical fabrics;artificial leather starting
materials;cylindrical filter elements; andnanofibers.In further meltblown developments, the
Textiles and Nonwovens Development Center (TANDEC) at the University of Tennessee (UT), Knoxville,
Tenn., is playing an increasingly important role in research and development for meltblowing
processing and the development of meltblown products. In its research, TANDEC took a look at
multi-hole meltblowing lines operating at commercial speeds. According to Randall Bresee, Ph.D., a
UT professor, measurements were obtained on-line at various locations between the die and
collector, as well as off-line from webs. On-line measurements include fiber speed, fiber
acceleration, fiber diameter, fiber temperature and air speed. Off-line measurements include
birefringence, fiber entanglement, fiber orientation and differential scanning calorimetry. These
experimental measurements provide a basis for gaining a greater understanding of the meltblowing
process.Furthermore, TANDEC, in combination with the Ian Carson Shell Coordination Centre S.A. and
Shell Chemical Co., Houston, presented an overview of the development and characterization of
poly(trimethylene terephthalate) (PTT)-based bicomponent meltblown nonwovens. In this study,
PTT-based monocomponent (mono) and bicomponent (bico) webs were produced on Germany-based
Reifenhers Reicofil® bicomponent meltblown line at TANDEC. Thermal and flow properties of PTT were
first examined using differential scanning calorimetry and melt indexer for an effective
experimental design through the Surface Response Methodology (SRM). The processability of meltblown
in a wide range of operating temperatures was investigated.Melt temperature, melt throughput, air
temperature, air-flow rate and distance of collector to die (DCD) were considered as primary
process-control variables. The webs produced, both mono and bico, with polypropylene were
characterized for fiber diameter, bulk density, air permeability, hydrostatic head, tensile
properties and heat shrinkage.Non-round and curly or twisted fibers were observed in the bico
PP/PTT webs by a scanning electron microscope. It was found that the PTT grade studied is quite
suitable for the meltblown process. The PTT/PP-based bico webs showed enhanced barrier properties
and heat resistance.TANDEC also presented, along with the Natick Soldier Center, Natick, Mass., a
study on the process properties of meltblowing polyurethane for military protective apparel
garments. The objective of this work was to develop materials that are stretchable, conformable and
breathable; and have the required barrier protection against biological and chemical agents. The
method chosen to achieve these properties was by meltblowing thermoplastic urethane (Noveon Estane®
58227) on the 6-inch meltblowing line at TANDEC.Three promising processing conditions that were
evaluated produced air and water vapor transport properties that were comparable to those of
Gore-Tex® breathable materials.Spunbound Technology 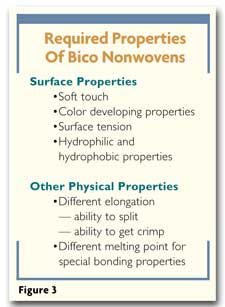 Spunbond technology is now being practiced throughout the world, thanks to the availability
of turnkey processing units. Polypropylene is still the major polymer used for spunbonded fabrics,
but a wider range of polymers is now being used for the development of specialty products. Bico
fiber technology is now being utilized for both spunbonded and meltblown nonwovens.The focus has
been on spinnable resins, according to Hans GeorgGeus, research and development manager, Reifenher
GmbHandCo. The characteristics of these fiber grades are relatively low viscosity, significantly
high melt stability, excellent purity and homogeneity, as well as a narrow molecular weight
distribution.Use of polyolefins, polyamides and polyesters has become common in the industry.
Within this range of resins, there is the potential to use variations such as copolymers,
terpolymers and blends with materials such as polyolefins and oligomeric materials. Some of the
required properties in combining resinous materials can be found in Figure 3.The shear viscosity
and an elongational viscosity at the given temperature are the most important properties. Other
important items are: the degree of thermal stabilization; the degree of solubility in the second
polymer; crystallization and crystallization speed; and, last but not least, the MFR of the various
polymers.The melt temperature for each polymer can be set differently, until the polymers are fed
into the bico system. Then the two materials are jointly passed through only one temperature. In
practice, this is not a limitation, because the difference between the two set temperatures cannot
continue to be very large, as the temperature of the two polymers will equalize to some degree. The
two major types of processes for making spunbonds are the open systems and the closed systems (See
Figure 4). The most commonly used closed system is the Reicofil III System. 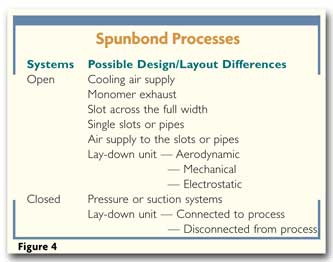 Bico NonwovensBico products from filament lines are usually produced from side/side,
core/sheath or segmented pie filaments. The different cross sections of these filaments determine
fabric properties. In addition to these properties, the filament shape and cross section need to be
considered. Spunlaced NonwovensThe production of spunlaced nonwovens has practically doubled
between 1995 and 2000, and quadrupled between 1985 and 2000, according to Alfred Watzl of
Germany-based Fleissner GmbHandCo. Spunlace enjoys the highest growth rate of any nonwoven
(See Figure 5).Some spunlaced products can be used directly after they are hydroentangled
and dried, but many fabrics can be enhanced by further processing. Additional processing that can
be applied to spunlaced fabrics includes: impregnation with chemical binders; finishing with
chemicals; dyeing or printing; and thermofusion or heat-setting.An example of a spunlaced line with
fiber opening, blending and two cards is shown in Figure 1. Such a production line can be further
enhanced by adding additional processing lines in-line. Fleissner can supply all of the major
components of a spunlaced line, from hydroentangling through dyeing and finishing.Watzl further
discussed bonding and finishing with chemical binders and chemicals. Chemical binding comprises at
least two steps: first, the binder is applied; then, the bonding process is triggered by a thermal
treatment. Maximum strength in a nonwoven is achieved when all fiber-crossing points are bonded in
a point-shaped form fit. A wide range of additives can be incorporated in the binder systems,
including thickeners, softeners, colorants and flame-retardant (FR) agents.A range of application
methods for applying binders, colorants or other finishing agents includes foaming, spraying and
various wet-application techniques. Special techniques such as print bonding are also employed. In
hot-air bonding, spunlaced nonwovens with increased strength and pilling resistance can be made by
incorporating bico fibers in the blend and thermofusing the lower-melting fiber component by hot
air in single- or multi-drum dryers. This method of bonding nonwovens eliminates the buildup of
binders in the unit, a common occurrence when using chemical binders.Heat-setting can be done in a
hot-air drum dryer when improved fabric dimensional stability is required. Heat-setting is
important when processing polyester fabrics for some applications, such as coating. 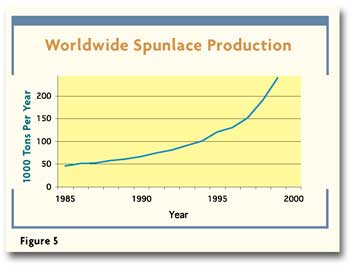 Combining Nonwoven TechnologiesFrance-based Rieter Perfojet is the only nonwoven
machinery producer that makes equipment both for spunlaced and spunbonded nonwovens, according to
Daniel Feroe, area sales manager, and Frederic Noelle, research and development manager. The two
Reiter Perfojet executives discussed how spunlace and spunbond technology can be combined to make
an improved wiping fabric.Rieter Perfojet, in its Jetlace® 3000 machine, has raised the efficiency
of hydroentanglement technology by improved design of the internal chambers within the injector
body. The design of the new 400-bar injector allows for a uniform and turbulence-free flow of water
within the injector body, enabling a more efficient water jet created by the flow of water through
the injector strip.
Editors Note: The complete set of papers presented at the INTC 2001 conference can be obtained
from INTC 2001, INDA/TAPPI, P.O. Box 1288, Cary, N.C. 27512-1228. Copies of the papers are
available in written form or on CD-ROM.