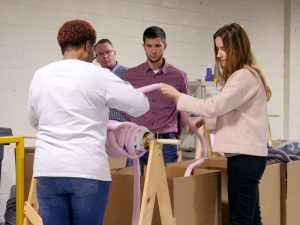 CHARLOTTE, N.C. — February 6, 2020 — Jones Family of Companies is excited to announce our partnership with Ohhio. Ohhio began as the accidental brainchild of Anna Marinenko. When Marinenko stumbled upon a skein of merino wool, it was creative love at first sight. She decided to attempt knitting with the chunky yarn using her arms instead of needles and a new trend was born.

Founded in December of 2015, Ohhio created a Kickstarter campaign to launch its business and bring their distinct chunky knit to the mainstream audience. Since its inception, Ohhio has expanded from a one-person operation to a thriving team of twenty.

Jones Family of Companies will take care of the production of the vegan Ohhio yarn in its Humboldt, Tenn., plant. The team of Ohhio posted the following on its Facebook page: “We have a partnership with the great team of Jones Family of Companies. Since the first day we met, we felt like we’ve landed in the right place with like minded people. Let our journey begin.”

“After four years of operating in Ukraine, we realized we needed our production to be closer to our primary market,” said Pavel Maryanenko with Ohhio. “We believe that producing and shipping products within the U.S. moves us forward toward sustainable production. Cutting out the middlemen allows us to be more competitive and more ecological because there is less transportation involved overall.”

Jones Family of Companies looks forward to bringing many more companies to their Humboldt facility, opening opportunities to partner for success. Senior Vice President Andrew Dailey said, “The model we are developing broadens the avenues for extending Jones’ employment reach in West Tennessee. The pursuit of these relationships maximizes Jones’ assets and expands our business base.”