Increases in the figures for Australia and Uzbekistan have been more than offset by reductions for China and smaller markets. The forecast for 2015-16 has been lowered by 206,000 metric tons, owing primarily to a sizeable decrease for China.

World raw cotton consumption has been raised by 49,000 metric tons for 2014-15 and 56,000 for the following season. This has resulted from increases in both seasons for Vietnam, offset partially by decreases for Brazil.

The rise in global stocks in the current season is thus now expected to be slightly less than two million metric tons, while a decline is foreseen in 2015-16 of 570,000 metric tons. 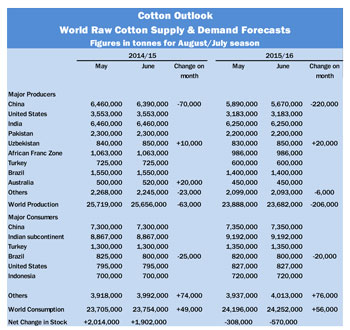