BIRKENHEAD, England — March 20, 2014 — Cotton Outlook’s world production number for 2013/14 has been raised by 140,000 tonnes, leading to a commensurately greater carryover at the end of the season. The change is attributed to increases for China and the African Franc Zone.

The 2014/15 global production figure has been revised upwards by 56,000 tonnes, owing mainly to changes for China, the African Franc Zone and a number of smaller producing countries. 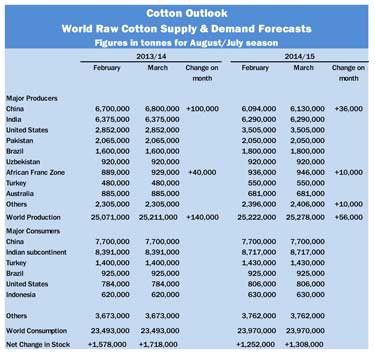