Production is placed at 639,000 tonnes, which is about 130,000 tonnes more than projected
consumption.This season’s and last season’s surpluses combined more than offset the sharp deficit
that accumulated in 2008/09 and2009/10, which was accompanied by record high prices.

The implication is that prices will stay under downward pressure in the immediate future. 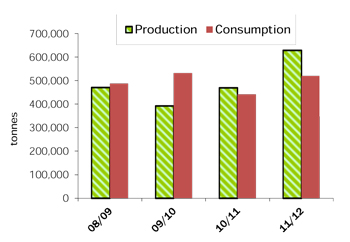