For years, China’s economy has soared with double-digit growth. However, over the past two years, the Chinese economy showed a very slight drop. So-called experts from the West predicted a crisis for China, although this didn’t bother the government very much.

Some governments recorded the growth of the Chinese economy in the first quarter of 2015 to be “only” 7 percent; indeed proof of a solid economy, if one compares this growth with the rest of the world and its approximate 1-percent growth rate. 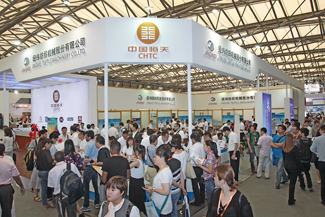 Shanghaitex 2015 was supported by professional buyers from the textile industry.

Transformation
Slowly, upon the request of the government to have more stable and sustainable growth, Chinese products are coming closer to meeting international standards. Additionally, it was the plan of the Chinese leaders to support the domestic industry to a larger extent. And that happened too. Therefore, it was going to be very interesting to see how Shanghaitex would turn out given this somewhat unusual economic climate.

Even the organizers of the show said: “China’s textile and garment industry has entered the phase of transformation and upgrade. Rising labor costs is becoming a tremendous challenge for the industry, which is intensive in labor. Applying new technology to improve the industry’s productivity, improving product quality and exploring new markets will be the key factors affecting companies’ long-term development.”

The Event
Unfortunately, the weather in Shanghai was not very favorable during Shanghaitex. Pouring rain for almost the whole show bothered visitors, including foreign visitors. Shanghai’s airport had to cancel more than 200 flights on Wednesday because of heavy rain.

To answer the question, “How was the show,” Textile World interviewed some 10 exhibitors about their impressions of the 4-day event. Unanimously, all executives interviewed were positive about the show.

As might be expected, more than 90 percent of the visitors came from mainland China. “Why should foreign visitors come to Shanghaitex, if they can see the whole world in November at ITMA in Milan?” said Dr. Dirk Burger, CEO, Germany-based Trützschler Nonwovens.“

However, some foreign visitors, mainly from India, Pakistan, and Bangladesh were also welcomed. Overall visitor numbers weren’t huge, but the quality of the visitors was much better said many interviewed executives. “No tourists or brochure collectors,” reported many exhibitors. 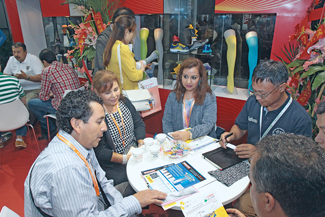 New Exhibits
As always, it is expected that machinery will be the center of attention at any exhibition. Some of the Shanghaitex exhibitors showed new products and provided TW with information on the new equipment.

Cem Yalcin, head of sales, Switzerland-based Saurer Ltd., mentioned that Saurer showed the Schlafhorst Autoconer 6 for the first time at an exhibition, and the interest was great. “We welcomed more than 80 potential customers, and they were very pleased with the new machine,” Yalcin said.

Tiziano Sandonini, marketing director, Italy-based Santoni Ltd., mentioned that high speed as well as some deknit products were of the most interest to show visitors. “We can run cellulosic fibers at a very high speeds, and cellulosic fibers are very much demanded at the moment for all kind of knitted products,” Sandonini said.

Some time ago, Uster acquired Switzerland-based Jossi, a producer of equipment designed to detect foreign material in raw cotton at the beginning of the opening section. “Many visitors are interested in this equipment, of course, due to the increasing quality requirements,” said Gabriela Peters, product manager, yarn, for Switzerland-based Uster Technology Ltd.

“The segments are shifting because the technical, as in quality requirements, are rising,” remarked Saurer’s Yalcin. “However, high-end won’t be high-end anymore. It’s moving closer to the middle range and the future high-end products will be a niche market. The markets are getting more aggressive and the mid-range will grow.”

Most Important Markets
Despite rumors of shrinking Chinese economy, Asia in general, and China in particular, are still the most important markets for the global textile machinery industry. The interviewed manufacturers judged the importance of Asia at 70 to 75 percent, and some 10 to 15 percent of machinery is going to Europe, if Turkey is included in this market region and the balance is the rest of the world. However, some other Asian countries including India, Indonesia, and particularly Vietnam as one of the most promising markets, and also Korea and Thailand were mentioned.

“Asia is still the most important market area, however, the focal points are shifting and moving from cotton to more man-made fibers consumption, particularly in India, but also in China,” said André Wissenberg, vice president of corporate communications, Switzerland-based Oerlikon Textile GmbH & Co. KG.
One thing should not be forgotten, said some machinery producers, is that the Chinese market is guided by semi state-owned companies, while Indian textile manufacturers are usually private companies.

Changing Market Environment For China
The changing market environment for China with regards to labor and energy costs heavily influences the Chinese market. Uster’s Peters is convinced that the Chinese market will still grow further. “However, not at the same speed like before,” she said. “Though, thanks to its sheer size, China is still the most important market.” On a scale of 1 to 10, all interviewed exhibitors said China is on top with a rank of between 8 and 10. Though, said many Europeans, because of the still positive economy, for some regional service centers of the European suppliers, it is no easy feat to find qualified employees on the Chinese job market.

That some Chinese manufacturers already have reacted to the new conditions, was mentioned more than one time by the interviewed executives. China now invests now heavily in foreign countries to get cheaper labor and stay competitive on the global market. Also, the main focus is changing. China is by far the largest man-made fiber producer in the world and much more capacity installations are underway. On the other hand, there are still millions of tons of cotton in stock in China. Most of the interviewed people were convinced that in the near future, man-made fibers will play a more important role for the Chinese textile industry than the more expensive cotton fiber.

The Future
All interviewed companies are expecting a good year in 2015. Despite the fact that India is gaining ground and some other neighbor countries too, everybody was convinced that the strength, and purchasing and producing power of China will stay for many years to come. Rieter’s Thom mentioned that the first six months for Rieter were fine. “China is still number one, Bangladesh was surprisingly good,” Thom said. “On the other side, China is investing heavily in new capacities, but with high quality. In Xin Jang, there is a project for 20 million spindles — 7 million are already installed. Despite all talk of overcapacities this is an astonishing project, isn’t it?”