The title for the 2014 ITMF Annual Conference, held October 16-18 in Beijing, was “Shared Responsibility, Shared Opportunity.” Dr. Christian Schindler, Director General, ITMF, said: “We see the main theme as an indication to the responsibility of the entire value chain in the textile industry. The importance of partnerships is becoming increasingly more important than isolated analyses of individual companies or industries.”

The conference started with a look at the economic situation in China. Faced with a modest slowdown in growth possibly the world thought that China is in trouble— it isn’t. Fact is, China is shifting from a mass production country to a place where quality products are in the spotlight. In the 3rd quarter of 2014, the economy rose by 7.3 percent. Is there any other country that can show such growth? 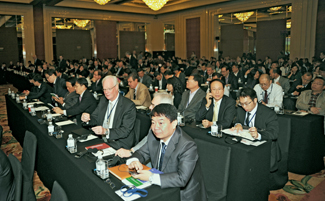 Delegates from all over the world attended the 110th International Textile Manufacturers Federation (ITMF) annual conference in Beijing.

Strong Chinese Delegation
In an unusual fashion, the main topic was emphasized in most of the speeches and presentations throughout the conference. Chinese speakers particularly insisted on closer collaboration and cooperation between the Western world and China.

The majority of conference attendees came from China. One reason for this attendance pattern is definitely the ease of going to an event in one’s own country. Another reason was the election of Wang Tiankai, president, China National Textiles and Apparel Council (CNTAC), as the new ITMF president. Despite the rumors about a drop in China’s trade, is the fact that China is leading the way to the top of the global economy, and its arrival at the top will only be a matter of time. 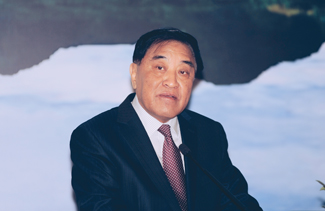 Uncomfortable Cotton Situation In China
Of particular interest is the fact that China is still holding a cotton stock of some 10 million metric tons (mt), an amount that equals annual Chinese consumption. Wang said frankly that the recent cotton policy in China has to be changed. However, said John Cheh of the Hong Kong-based Esquel Group, this will take years to be settled. “All stages of the production chain have a lot of expenses with stocks, cotton merchants, spinners and weavers, and the retailers do not understand why that is so,” Cheh said.

Gao mentioned that cotton prices now should be based on the markets and that spinners should be the buyers, not the government. From September 14 until March 15, the Chinese government will not have any influence on cotton prices, she assured the listening audience. However, if the cotton prices are too high, the government probably will release some raw material from the existing 10 million mt to balance prices.

Gao said the decreased acreage will be reduced by some 9.34 percent down to 4.23 million hectares, and that India could become the largest cotton grower in the world. She estimates the cotton consumption for the next season at some 8.5 million mt. 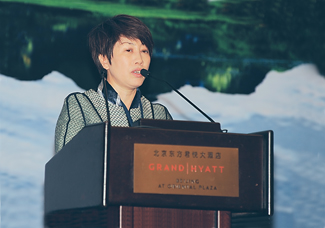 However, a stock of 10 million mt is normal for China and the stock’s only purpose is to stabilize the market so recent past volatilities with cotton prices will not occur again. Up-to-now, every cotton fiber farmed in China was sold to the government. Gao explained why there are two different cotton prices: There are 40 million cotton farmers in China, and the government bought their crops at above market prices to help stabilize the market. The price was determined in 2011 at 19,800 renminbi (US$3,236). Then the financial crisis occurred, the global price of cotton fell. The price set by the government — which is much higher than the current global cotton price — is not good for Chinese spinners, Gao said, and it will be changed in the future.

Ongoing Transformation
“We are in a strong transformation,” Gao said. “China is shifting from a mass production country to a place where we put much more emphasize on quality. And I can tell you the quality, and not only textiles, is getting better step by step. And therefore, if a country is transforming itself to another level, there are many bridges to cross and problems to be solved, both technically and mentally.”

China’s textile growth dropped from 10.8 percent in 2012 to 8.3 percent in 2013. In 2014, Wang expects the growth rate will further drop to 7.4 percent. However, one must know that in 2013 China was responsible for 37.1 percent of all textiles produced worldwide, and 80 percent of all man-made fibers also are delivered from China.

Wang is confident that in the near future China will be responsible for half of global fiber consumption. 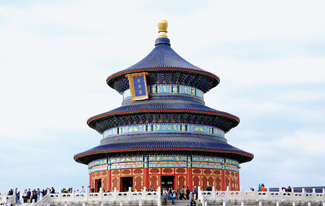 Targets
Wang clearly defined the priorities of the Chinese textile industry: To improve basic research and development projects; to bolster technical innovations; to improve environmental conditions for a better climate; and to establish consistent recycling of textile waste. Telling the world a story is one thing, proving it something else. Bruno Lanvin, executive director, INSEAD’s European Competitiveness Initiative, said: “China is shifting its focus from just putting things together. China knows that if it wants to play in the top leagues, it needs to create and innovate, and they can do that only with a highly educated population.”

A Top Player
Today, things are changing, even the slogan “Made in China.” Wang and other speakers at the ITMF conference said quite often the “Made in China” label must be changed into a “Created in China” label. The plan is to transfer China from a manufacturing-focused country into an innovation-based economy by the year 2020. A survey said that last year, China overtook Japan in terms of research and development (R&D) spending. In 2013, the Japanese gross domestic product (GDP) dropped heavily because of yen depreciation. The invested money for R&D compared to the GDP fell from $202 billion in 2012 to $164 billion in 2013. Unbelievable, especially when one realizes Japan was the inventor of total quality management. Meanwhile, the total Chinese investment for R&D rose from $148 billion in 2012 to $166.5 billion in 2013.

Analysts expect that by 2018, China will overtake the combined R&D spending of Europe’s 34 countries. And by 2022, the nation’s R&D spending is expected to match that of the United States, when the two countries are expected to spend some $600 billion each. Many experts say China has the fastest growing expenditure in R&D. They mention that China has grown at an average annual rate of 20 percent per year over the past decade. One should bear in mind that the United States still leads the way in R&D spending globally. However, according to a report released early this year by the National Science Board, China is constantly closing the gap. The report adds that knowledge-based economic activity is gradually shifting toward Asia, particularly China, and Asia’s share of total global R&D spending has risen from 25 percent a decade ago to 34 percent today, reflecting rapid economic growth in the region. It’s time for the Western World to wake up! Today, the global economy is probably facing its biggest transformation since the start of the industrial revolution in the 18th century. And no one should miss it.