A
s the traditional textile industry in the United States struggles with the challenges
brought about by relentless competition from lower-cost regions of the world — and even as some
specialty areas are experiencing competition from these regions — the biomedical field offers
unique opportunities to textile manufacturers that have the determination to transform their
commodity-driven and/or traditional businesses. Such a company is Concordia Manufacturing LLC, a
Coventry, R.I.-based family-owned business that started out in 1920 manufacturing silk yarns,
transitioned into man-made yarns used in traditional textile applications, and in the late 1980s
moved into specialty engineered yarns and other fiber products for various technical uses. Over the
last four years, the company has added a biomedical focus to its operations.

Concordia found itself on a road fraught with obstacles that threatened its very existence as
its customers turned increasingly to cheaper foreign sources for the yarns they used in their
products, or as these customers themselves were forced out of business because of foreign
competition. However, with funding from state agencies and other sources, the company has been able
to push ahead in a very specialized niche within the biomedical arena, increasing the size of its
workforce and reversing a negative trend that began as Asian textile manufacturers started to claim
an ever-larger share of the global textile marketplace. 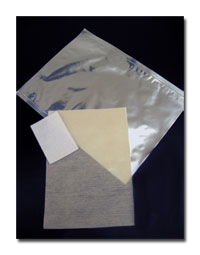 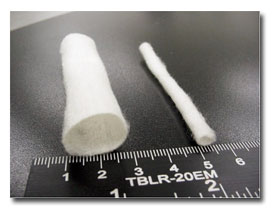 “Because of where we started,
twisting silk, we’ve developed our core competency in fiber handling, particularly continuous
filament fiber handling,” said Randal W. Spencer, president and CEO. “We’ve just been trying to
push the envelope on that area as hard as we can for our whole existence. We were probably the
first company to install the two-for-one twister, and we were the largest two-for-one installation
in the country for a number of years. We were doing most of the yarns that went into Velcro®
fabrics worldwide. With the advent of Asian manufacturing, all that is going away. What once was
quite special is not special at all anymore, and the Chinese are buying the latest and best
machines as well. So it’s up to us to be even more innovative, and that’s the driver that’s really
pushing us into the medical arena.”

Concordia began heading down the biomedical path after it was approached by a major medical
device manufacturer to develop a solution to process a brand-new bioabsorbable fiber for in-body
tissue-engineering scaffolding applications.

“The difficulty was that the fiber was extraordinarily fine — 10 denier — with a tensile
strength measured in fractions of a gram, and if you held it in the palm of your hand for too long,
it would disappear — it’s a fast-resorbing fiber; but they were desperate to get it into a fabric,”
Spencer explained. He added that the device manufacturer, which had not been able to find a
machinery manufacturer that could provide a processing solution, was referred to Concordia by
Italy-based Michele Ratti S.p.A. Concordia had bought twisting machinery from Ratti, and the two
companies had at one time collaborated to develop a Ratti upgrade for some older machinery.

“We have always designed and developed our own machinery whenever it was appropriate, and so
we understood the problem right away, and we designed and built a machine that would handle this
material,” Spencer continued. “That got us started, because once we proved we could make a yarn out
of this single 10-denier filament, they knew they could get it into fabrics. So we designed a yarn.
The device manufacturer had its own fairly large knitting facility, and we helped them produce the
first fabric, all within a period of about four months. Then, subsequent to that, their people were
having a hard time knitting it, so we took over that part of it.” He added that Concordia adapted
some of its machinery to knit the fabric. 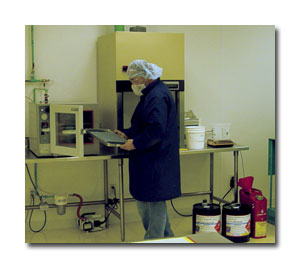 And Building A New Business

In 2003, Concordia underwent a
restructuring to focus on biomedical textiles, particularly on tissue-engineering scaffolds. The
transformation was helped along by equity seed funding from the Slater Center for Biomedical
Technology, now consolidated into Rhode Island’s Slater Technology Fund Inc. — fittingly named, in
this case, for 18th-century US textile industry pioneer Samuel Slater. The fund is supported by a
legislative grant and administered by the Rhode Island Economic Policy Council.

“The whole idea is to help promote new technologies in the state,” Spencer explained. “The
funding they provided made it possible to bring in capital to help finance this transition.”

Concordia’s first foray into biomedical textiles led to its building a cleanroom to minimize
both nonviable particulate and viable microbial matter in the air, and provide a controlled
manufacturing environment. The cleanroom, built in 2003, has been crucial to the company’s
transition, as is a very sophisticated quality management system.

“To work with these materials, you need a highly controlled environment,” Spencer said. “You
just can’t produce this material out on the typical textile manufacturing floor.

“We have a very good quality system,” he added. “We’ve been working with technical fibers
for a long time, but because we’re actually getting into human-use applications, obviously the bar
has been raised. There’s a lot of retraining that has to be done.” In addition to ISO 9001:2000
certification for general quality management systems, the company has received certification for
ISO 13485:2003, which specifies quality management system requirements for the manufacture of
medical devices.

Concordia’s fiber-handling knowhow provides a foundation for its thrust into this special
niche within the biomedical fiber field. “We’re not polymer chemists here, and we don’t try to be,
but we are dealing with biomaterials — polymers or fibers that are resorbable in the human body,”
Spencer noted. “There are a lot of medical textile fabrics that go into the body — hernia meshes
made out of polypropylene, vascular grafts made of textured polyester. We’re not dealing in those
areas — those are well-understood. We’re focused primarily on bioabsorbable fibers for
tissue-engineering applications. The Holy Grail is to be able to model and get yourself to grow
your own replacement organs — bones, arteries and even larger organs.” 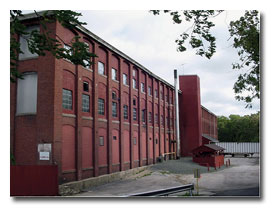 The company’s mechanical and engineering expertise also provides an advantage. “We have our
own machine shop and will develop machinery that’s required for different applications that we’re
presented with,” Spencer said. “We have a lot of textile machinery here in the plant, so where we
can modify something we already have, we will. But often it’s necessary to build something unique
simply because of the delicate nature of these fibers.”

Another ingredient in the mix is Concordia’s employees, some of whom already have undergone
retraining to work in the biomedical area. “We have some very loyal employees with really strong
finger smarts,” Spencer said. “They just have a sense in their hands of how to handle fibers, and
once they’ve been retrained into the particular characteristics of resorbable fibers, we can do
pretty unusual things.”

In his effort to develop Concordia’s biomedical business, Spencer recently brought Art
Burghouwt into the company as executive vice president, Medical Group. A veteran of more than 20
years in the medical device business — most recently with Cambridge, Mass.-based Genzyme, he has
watched the evolution of the market for biomedical products.

“Ten years ago, the whole tissue-engineering and biomaterial market was more of a
conversation about possibilities, but now quite a few products are starting to hit the market, and
the whole concept of biomaterials and hybrid devices that go from mechanical products into a more
biological healing aspect is really starting to come into its own,” Burghouwt observed.

“There’s a tremendous need for responsive, small-scale prototyping, and a lot of these
things start in development stages,” he said, drawing on a perspective gained from his years on the
end-product side of the business. “There just aren’t very many companies out there that can convert
raw materials into device components or intermediate products. Certainly, those textile companies
that may have done some of this kind of work have no experience with resorbable polymers at all, so
it was really useful to bring the knowledge of how to produce resorbable sutures, and how to
package and sterilize them — to add that whole experience to Concordia’s base of textile
manufacturing and make that into a useful entity for our medical device customers.” 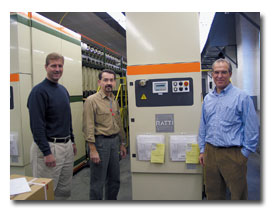 “We make BIOFELT in a wide range of
different densities depending on what types of tissue you’re trying to duplicate. It could be a
very open structure depending on what type of cells the researcher wants to use, or a more dense
structure. That’s our foundation product, but it’s led to other types of structures as well. We
understand a whole range of fabric-formation systems. It’s just a matter of applying the right
system to the particular application,” Spencer said.

“There are many different iterations of BIOFELT, but our base material is pretty much yarns
that have been approved for suture applications — materials the Food and Drug Administration has
already cleared for human use,” he added. “Resorbable sutures really started becoming popular in
the early to mid-‘80s, maybe a little before. As those materials have evolved, they’ve opened up a
whole range of products now in fiber form that can be converted into fabric form, and that’s where
the tissue engineers are really getting excited.”

Spencer described two ways in which
scaffolds are used: “Because the scaffolds get resorbed by the cells as they grow, they help
vascularize wound areas, so in some cases — such as in orthopedics — they might be planted in the
body directly without any cell-seeding at all, and they will help protect and regenerate damaged
tissue in and of themselves. The other model is to take the patient’s own cells and seed them onto
the scaffold in a bioreactor, which gets these cells differentiated to the proper kind of cell for
whatever kind of tissue is being manufactured. A lot of work is being done on arteries, for
instance. We actually make a tubular BIOFELT scaffold that can be put in a bioreactor, which takes
blood cells from the patient’s body and gets them to differentiate and turn into vascular
structures.”

Commenting on the efficacy of scaffolds for tissue engineering, Burghouwt noted: “Cells tend
to grow much better with the scaffolds, where you have some base material to populate with these
cells. You get much better results than if you were just to implant the cells after you multiply
them in the lab without the base material.” 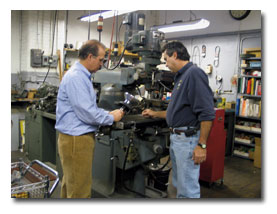 
From Research To Reality

“Tissue-engineering development has
been going on for more than 10 years in terms of companies that have had some false starts or
thought they had a product and didn’t quite make it, but it’s really starting to change now, based
on their experiences,” Burghouwt said. “A lot of lessons have been learned, and I think we’re
seeing a much more realistic attempt now that some of the questions have been answered over time,
and the products are working. Some of the early examples of what’s possible are in the market
today.

“It’s very exciting to think that it’s starting to become reality rather than just a
research lab activity,” he added. “Certainly to be part of that is going to be a tremendous
opportunity for Concordia.”