S
ubstances that undergo the process of phase change are also known as phase change
materials (PCMs). These materials store, release or absorb heat as they oscillate between solid and
liquid form, giving off heat as they change to a solid state and absorbing it as they return to a
liquid state.

Some PCMs change phases within a temperature range that is just above and just below human
skin temperature. This property now is being used in fabric and foam to store body heat and then
release it when needed. PCMs in the form of microcapsules can be incorporated within fibers or
foams, or may be coated onto fabrics. 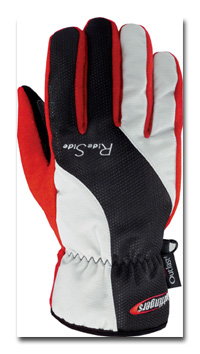 Providing a comfortable night’s sleep when in the form of temperature regulating bedding,
Outlast Technologies’ Adaptive Comfort® phase change technology was first made popular with skiers
for outerwear and gloves.


The National Aeronautics and Space Administration’s (NASA’s) space research program in the
late 1970s and early 1980s included considerable research and development on new materials that
could protect delicate instruments in space from the temperature extremes they encountered. NASA
used PCMs on the Lunar Rover and Skylab projects in the 1970s.

A NASA study identified more than 100 PCMs. Some – including pure lithium chloride – are
being used for heat management of electronics, telecommunications and microprocessor equipment.
Lithium chloride, however, is not suitable for normal textile applications.

In 1987, Yvonne G. Bryant and David P. Colvin of Triangle Research and Development Corp.
(Triangle R&D), Raleigh, N.C., demonstrated the feasibility of incorporating PCMs within
textile fibers, and were issued a patent in 1994.

Materials used in this work included paraffinic hydrocarbons, such as eicosane; and plastic
crystals, such as 2,2-dimethyl-1,3-propanediol (DMP) and 2-hydroxymethyl-2-methyl-1,3-propanediol
(DMP). When plastic crystals absorb thermal energy, the molecular structure is temporarily modified
without changing the phase of the material. The thermal properties can be optimized by the choice
of the paraffinic hydrocarbon. Compounds with a higher number of carbon atoms have higher
temperature stability.

The patent issued to Triangle R&D on the inclusion of PCM microcapsules within a fiber
covers a broad range of fibers including polyester, nylon, acrylics and modacrylics. The patent
rights later were licensed to Gateway Technologies, now Outlast Technologies Inc., Boulder, Colo.

The incorporation of PCMs within a fiber requires first that the PCM be microencapsulated.
Courtaulds Fibres, now part of the Acordis Group, The Netherlands, has produced acrylic fibers
containing PCMs. In producing these fibers, the company found that in order to produce a
microencapsulated PCM, some of the following criteria had to be met:

•    stability to mechanical action and chemicals; and

•    core-to-shell ratio, with PCM content as high as possible.

In the mid- to late 1980s, work on temperature-adaptable fabrics was undertaken at the US
Department of Agriculture’s Southern Regional Research Center (SRRC) in New Orleans. This work was
done under the direction of Tyrone L. Vigo and his associates, and was based on the durable binding
of polyethylene glycol to cotton and cotton/polyester blends using polyfunctional crosslinking
agents and acid catalysts. The resultant products were designated “Polytherm” fabrics. Vigo
described the action of the polyethylene glycol polymer complex as similar to a helix that coils
and uncoils and acts like a thermal spring.

The US government garnered three patents from the work of Vigo and his associates at SRRC.


Frisby Technologies Inc., Advance, N.C., was founded in 1993 by Greg Frisby. The company’s
business was based on sales of its thermal management products Thermasorb® and ComforTemp®. Frisby
licensed these products to its customers and directly sold selected finished products. Frisby
developed and patented gel-coated microcapsule technology for the preparation and application of
thermal management materials. It also licensed some technology from Triangle R&D.

Frisby succeeded in introducing its ComforTemp products into a wide range of end-use items
from prestigious manufacturers.

In 1999, Frisby launched its line of SteeleVest® cooling vests. These vests, worn by workers
facing extreme heating conditions in industrial and military environments, can provide up to four
hours of cooling.

According to Frisby’s 2000 annual report, things looked promising. The report included a
discussion of Frisby’s strategic alliance with Switzerland-based Schoeller Textil – Schoeller
Frisby Technologies GmbH – which had an exceptional first year of operation with more than 60
customers in 11 countries. Frisby also had formed alliances with Bridgestone Corp. and several
other companies in Japan.

However, after years of ongoing financial woes – including not reporting a quarterly profit
since going public in 1998 – the company declared Chapter 11 bankruptcy in January 2003 and removed
Frisby from his position as CEO, although he remains chairman. Mark Gillis, a turnaround specialist
with Anderson Bauman Tourtellot Vos & Co., Greensboro, N.C., replaced Frisby as CEO. Gillis
will preside over the company until its financial crisis is resolved.

In May 2003, Frisby auctioned off its excess furniture, equipment and inventory to raise
money to continue operating under bankruptcy protection. The company sold its ComforTemp trademark
to Freudenberg for use in Freudenberg’s phase change lining materials.

Earlier that year, The Business Journal critiqued Frisby’s bankruptcy. The publication
interviewed Patrick Gundlach, a mutual fund analyst with the Nichols Co., Milwaukee, who followed
Frisby for his personal portfolio and not for his company. Among the reasons he cited for the
company’s bankruptcy were Frisby’s inability, because of its small size, to leverage any pricing
power with suppliers or to stamp its brands in the minds of the consumers; the lack of growth
opportunities when the capital markets were denying funds to technology companies; and the
struggles of its apparel customers.

Other observers faulted the company’s decision to have an exclusive agreement with 3M Corp.,
St. Paul., Minn., to produce its ComforTemp product. 3M’s high processing costs limited the use of
some of the company’s products to higher-priced, lower-volume end-products.

If Gillis is able to get sufficient capital to keep the company operating until some
larger-volume customers and end-products are found, Frisby Technologies has a chance to emerge from
bankruptcy, or to find a buyer. 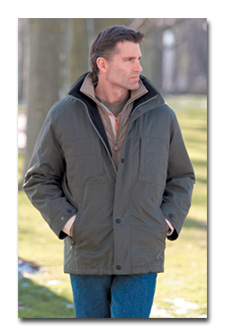 
Outlast Technologies was founded in 1990. Its initial efforts were based on the patented
technology it licensed from Triangle R&D. Some products are made by coating fabrics with PCM
microcapsules, and others are made using fibers containing PCMs. Thermocules® is the name for its
PCM material that is applied as a matrix coating on fabric. This type of coating allows the fabric
to maintain air permeability. The first Outlast products made with PCM fibers were made with
acrylic fibers developed with Acordis. The company also has worked with DuPont, Wilmington, Del.,
on the development of polyester fibers containing PCMs.

Most products using Outlast’s technology are made by outside contractors. The company
devotes considerable effort to marketing and merchandising Outlast products, whose major end-use
areas include:

Textile World
had the opportunity to discuss the performance of PCMs with Elizabeth McCullough, Ph.D., a
professor of textiles and co-director of the Institute for Environmental Research at Kansas State
University, Manhattan, Kan. She is well known for her research in the heat-transfer properties of
textiles and protective clothing. McCullough currently is working with Douglas C. Hittle, Ph.D., at
Colorado State University, Fort Collins, Colo., and others on an ASTM International task force to
develop meaningful test methods to evaluate PCMs in garments. McCullough published an article in
the May 2001 issue of Industrial Fabric Products Review. The following material is excerpted from
that article: 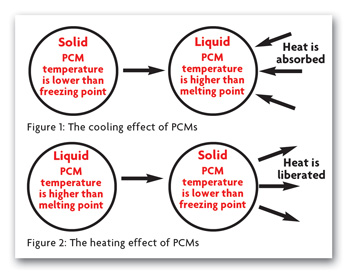 
When the encapsulated PCM is heated to the melting point, it absorbs heat energy as it moves
from a solid state to a liquid state. This phase change produces a temporary cooling effect in the
clothing layers
(See Figure 1). The heat energy may come from the body (e.g. when the wearer first dons
the garment) or from a warm environment. Once the PCM has completely melted, the storage of heat
stops. If the PCM garment is worn in a cold environment where the temperature is below the PCM’s
freezing point and the fabric temperature drops below the transition temperature, the
microencapsulated liquid PCM will change back to a solid state, generating heat energy and a
temporary warming effect
(See Figure 2). The developers claim that this heat exchange produces a buffering effect
in clothing, minimizing changes in skin temperature and prolonging the thermal comfort of the
wearer.


The clothing layer(s) containing PCMs must go through the transition temperature range
before the PCMs will change phase and either generate or absorb heat. Consequently, the wearer has
to do something to cause the temperature of the PCM fabric to change. PCMs are a transient
phenomenon. They have no effect under steady-state thermal conditions.


The real effects of PCMs in clothing can be determined if two identical garments are
produced for comparison – one with PCMs and one without. We recently conducted a study in which a
thermal manikin was dressed in body suits made of fabrics, with and without PCMs, and was moved
from a warm chamber to a cold chamber and back again. The change in power to the manikin during the
temperature transients was measured. The effects of the PCMs on body heat loss were then measured
over time. Overall, the effects were found to be small and to last about 15 minutes.

Unfortunately, somemanufacturers simply give PCM garments to a few people to wear and then
ask the wearers for their comments. This approach does not yield scientifically valid results.

PCM microcapsules can produce small, temporary heating and cooling effects in garment layers
when the temperature of the layers reaches the PCM transition temperature. The effect of phase
change materials on the thermal comfort of protective clothing systems will probably be maximized
when the wearer is repeatedly going through temperature transients (i.e. going back and forth
between a warm and cold environment) or intermittently touching or handling cold objects. The
temperature of the PCM garment layers must change over and over again for the buffering effect to
continue.

The Future Of PCMs In Textiles And Apparel


Although PCMs are being promoted in a wide range of apparel and related products, the
applications in which they can truly perform are limited. As better test methods are developed for
PCMs, producers of PCM materials and garments will have to more carefully target the markets in
which their products do perform. Otherwise, they risk a backlash from disappointed consumers.