W
hat began in 1979 with an ingenious idea has developed over the years into one of the
most environmentally friendly technologies in the dyehouse sector of the textile finishing
industry. In February 2008, the reward came: Wilhelm Christ, the long-time head of technological
development at Then Maschinen GmbH, Germany, was awarded the Economic Medal of the State of
Baden-Württemberg, Germany.

Outstanding services on the part of personages, companies and other institutions to the
economy of the federal state of Baden-Württemberg can be honored with a medal that bears the
designation, “Wirtschaftsmedaille des Landes Baden-Württemberg.” It is awarded for special
professional or entrepreneurial achievements in the service of the economy of Baden-Württemberg.
All areas of economic activity should be taken into account, especially those relating to
professional training, research and development, technology, environmental protection, foreign
trade and development aid.

Ernst Pfister, the minister for trade and commerce, medium-sized companies and technology,
presented the award to Christ. Numerous prominent guests from the worlds of politics and business,
as well as from his employer paid tribute to Christ’s life work, which commenced in 1966 when he
joined Then Maschinen and eventually developed the Airflow® technology. 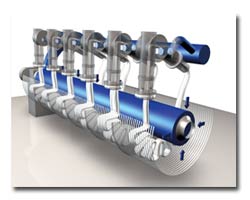 Air, the key element in the patented Airflow® technology, represents the ideal medium for
the transport of piece goods in jet-dyeing machines.

Rudolf Then gathered initial experience in dyeing-machine production in his barrel- and
tub-making shop, which he opened in 1919. At that time, textiles were frequently dyed by hand in
wooden tubs, and even the growing number of mechanical dyeing machines and pieces of apparatus were
made of wood. However, as this material was a source of constant problems, Then adopted a new
approach, covering the wooden slats with a durable porcelain lining, which prevented the formation
of spots and facilitated cleaning.

Then also was one of the first people to recognize the significance of stainless steel,
which was invented at the end of the 1920s, especially with regard to its acid-resistant
properties. Unfortunately, after World War II, Then shared the fate of many Saxon industrialists as
his company was confiscated. He fled west and in 1949 founded a new firm in Schwäbisch
Hall-Hessental and commenced production in the local barrel factory belonging to Karl Kurz. Steady
growth necessitated expansion, and in 1955, Rudolf Then Färbereimaschinen GmbH was founded jointly
with Karl Kurz Hessental KG. A new plant was built on a 36,000-square-meter site in
Michelbach/Bilz. The year 1960 saw the production of the first special steel pressure vessels,
which included high-temperature winch vats and beam-dyeing equipment. In-house control systems were
integrated into this equipment as early as 1964, in order that the equipment and the increasingly
complex controls and switchgear could be supplied from a single source. This still applies today
and is one of the special features of Then machines.

As Then had no children, at the end of the 1970s, his partners gradually bought up his
holding. Following the death of company co-founder Kurz, the company passed into the hands of Kurz’s
heirs, comprised of his children and grandchildren. 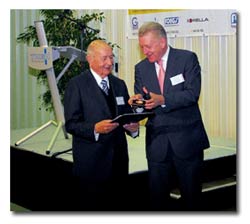 Wilhelm Christ (left) receives the Economic Medal of the State of Baden-Württemberg from
Ernst Pfister, minister for trade and commerce.

Just two years after his arrival at Then in 1966, Christ developed his first dyeing machine,
which at the time was already regarded as revolutionary. This was a fully flooded, high-temperature
jet-dyeing machine designed primarily for the treatment of man-made fibers that had recently come
onto the market.

New fibers in the textile sector repeatedly demand the development of new machinery.
Accordingly, the search for solutions that would save water and energy started as early as the
mid-1970s, and Christ first developed a partially flooded jet-dyeing machine with a horizontal
fabric storage chamber, a new type of jet, as well as machines with a round storage chamber — all
of which became successfully established in the market. At the same time, Christ was working
intensively on the design of equipment for the yarn-dyeing shop and, above all, the development of
yarn dryers, where he also achieved fundamental breakthroughs.

Rethinking began in 1979, when Then developed the Airflow technology. Up to this point in
time, increasingly expensive water, which was not available everywhere in sufficient quantities,
served as the dye transportation medium. In the 1970s, a winch-dyeing machine required a massive
volume of around 150 liters to dye 1 kilogram (kg) of fabric. In addition, this water had to be
heated. It was in view of these statistics that Christ, the head of Then’s research and development
department, tackled the question of how the enormous water consumption needed for piece dyeing
could be cut, along with the accompanying energy costs.

This was impossible with the traditional machines, as they employed a bath. Even with a jet,
water remained the transport medium, and therefore, consumption was high. In 1979, work started on
the development of the Airflow technology in cooperation with Hoechst AG, Germany. As Christ
remembers, “The starting point was the ‘Rapidcolor’ process for isothermal dyeing. This was used
primarily for yarns in a creel system and we upgraded the system to our development, which meant
that following heating in a steam flow, the separately heated treatment bath was conducted into the
jet nozzle for fabric transport and was thus kept in circulation.” 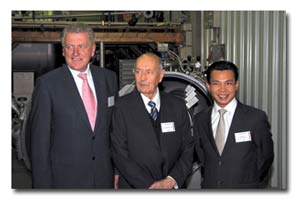 The next task was to distribute the reduced quantities of dyestuff and additives across the
fabric evenly, which could only be achieved using an aerosol. The aerosol replaced the treatment
bath and resulted in a completely changed mass ratio. The development work now advanced at speed,
and in 1981, the fundamental Airflow patent was registered. The German inventors were Christ, Dr.
Hans-Ulrich von der Eltz, and Albert Reuther.

The European patent was registered in 1982, and use of the technology commenced
simultaneously in numerous countries around the world. A European patent was granted in 1982, and a
US patent in 1984. The machine made its public debut at the 1983 ITMA in Milan and was met with
general ridicule from the world’s experts. Nonetheless, a 10-kg-capacity machine was installed in
the Hoechst technology center, and after lengthy customer trials by Hoechst and Then, the market
breakthrough was achieved. The first Airflow machine with a 150-kg-capacity was launched as early
as 1985 and changed the previous design — with its parallel use of individual storage chambers — to
one involving the simultaneous employment of several chambers in a single autoclave.

The first autoclave-design Airflow machine made its debut at the 1991 ITMA in Hannover and
possessed the basic features of the present-day Then Airflow. If one compares the machines from
1991 with the current one, it is evident that targeted optimization of the process technology has
resulted in a massive reduction in chemical and water consumption. The most important
characteristics of the technology are time savings, cost efficiency, reliable dyeing, material
protection and reduced ecological impact.

An airflow constitutes the key element in the technology, as it represents an ideal
transport medium. The replacement of the dyebath by air as the transport medium for piece goods in
jet-dyeing machines is a patented, pioneering achievement from Then. The nozzle pressure is only
minimally lower than that in the jet nozzle used to apply the bath liquor, which secures optimum
protection of the sensitive surface of the fabric. At the same time, the employment of the mass
flow principle ensures greatly improved hank spreading, which prevents creasing.

The moisture-saturated airflow furnishes uniform temperature distribution across the fabric
and in the machine, which is a prerequisite for even and reproducible dyeing. As a result of the
low liquor content in the dyeing autoclave, the goods are lighter than in a conventional machine
and can therefore be more quickly accelerated to high speeds. The risks of draft or yarn strain are
minimal, which is of special advantage with regard to the finishing of articles containing
elastane. The actual Then-Airflow model represents the result of the interplay between all the
technical possibilities and functions, offering economic and ecological advantages, which were
unobtainable with the dyeing technology used in the past. The outstanding advantages are:

•    unlimited flexibility for all fibers except pure wool and fabrics in a
weight range of 30 to 800 grams per meter, as well as all standard dyestuffs;

•    the lowest liquor ratio on the market: man-made fibers approximately
1:2; and 1:3 to 1:4 for natural fibers, depending on the article and the fabric structure;

•    energy savings of 40 percent with a frequency inverter — air as a
transport medium instead of the water is required by all other machines;

•    a reduction in total processing time of around 25 percent;

•    the most advanced piece-dyeing machine currently on the market;

•    the competitive edge derived from extremely low processing costs; and

Takeover By The Fong’s Group

At the end of 2002, Then merged with Switzerland-based Scholl Switzerland AG, which
specialized in the discontinuous wet finishing of textiles. In January 2003, joint sales commenced
under the name, Scholl-Then. However, in 2004, Scholl filed for bankruptcy, and proceedings
commenced for both the Then Maschinen- und Apparatebau GmbH and Scholl-Then GmbH in Germany. In
August 2004, a new start was made possible by an investment by the Hong Kong-based Fong’s Group.
With this investment, the former Scholl-Then GmbH was transferred into the new Then Maschinen GmbH.

With a workforce of around 165 at its location in Schwäbisch Hall-Hessental, Then
manufactures dyeing machines, control systems and dyehouse networks for global markets. As a result
of a sales network with more than 80 offices in all the important international markets and a solid
business situation, the future is seen with optimism.

More than 30 of the German patents registered in Christ’s name, as well as numerous
international patents and his machine developments for Then Maschinen GmbH, form the foundation of
the company’s existence and the securing of employment for its workforce. Moreover, at the award
ceremony, the management and staff thanked Christ not just for his outstanding technical
achievements, but also for his commanding and modest manner.