More good news for textile mill and apparel manufacturers: The current absence of cotton and man-made fiber cost pressure is likely to persist for at least another year. To be sure, any new slippages in these key industry cost inputs are not likely to be quite as impressive as those noted over the past 12 months, a time when cotton and man-made tags dropped by more than 10 percent and 3 percent respectively. On the other hand, there is still no indication that these quotes will reverse course — even with anticipated modest increases in global demand. Right now, TW editors are calling for about a 3-percent increase in world consumption of cotton, with a similar gain anticipated for key man-made constructions. Zeroing in on man-mades, TW’s hold-the-price-line optimism is based on a combination of two factors — more-than-ample capacity and relatively unchanged petroleum feedstock costs — factors that should almost certainly put a ceiling on any new price-boosting attempts. Note, too, that even in the case of viscose and acrylics, where supply and demand are in better balance, price have softened a bit in recent months. In any event, TW sees another, though fractional, overall decline in man-made fiber quotes possible over the next 12 months. Incidentally, this man-made cost easiness is nothing new — with quotes remaining relatively soft for three years now. Equally noteworthy: Over the past few decades, the average annual man-made increase of less than 1 percent has remained far under the nation’s general inflation rate. 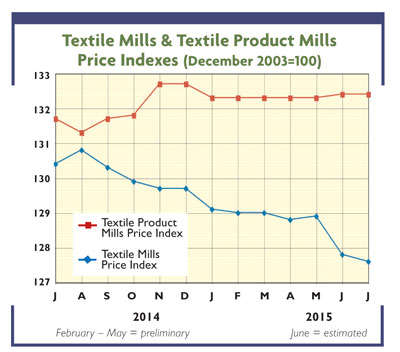 A Weak Cotton Market, Too
As indicated above, it’s much the same when it comes to cotton. And once again, top-heavy global supplies are playing a major role. Indeed, the sharp price decline over the past year can easily be explained by looking at world cotton inventory levels. At the end of the current marketing year, for example, world cotton holdings should total nearly 110 million bales — a jump of 8-percent above the previous year’s level. That’s more than double the level reported back in 2010 when the natural fiber was in short supply. Equally significant, the widely monitored global stock/use ratio is expected to reach a peak of 99 percent — the equivalent of nearly a full year’s supply. And once again, this will be well above the already high 94-percent reading estimated for last year. To be sure, preliminary estimates for the upcoming 2015-16 marketing year do suggest a small inventory decline. But as Cary, N.C.-based Cotton Incorporated recently put it: The stock estimate for next year would still be quite high by historical standards — high enough to rule out any price rise. Finally, combine these still weak cotton quotes with the aforementioned man-made price softness, and aggregate raw material outlays — by far the industry’s biggest expense — continue to fall. At last report, for example, materials were accounting for about 50 percent of the sales dollar on the mill level and roughly 43 percent of the comparable apparel maker’s dollar — percentages that are far under the peaks of just a few years ago.

A Look At Other Costs
Payrolls, the second biggest industry cost drain, do not seem to be signaling any problems either. And for good reason: In the textile mill sector, 2015 pay rates are up only a few percentage points — a very modest increase that is being offset by continuing productivity gains. And it’s pretty much the same upbeat picture when it comes to domestic clothing manufacturers. More importantly, recently inked pay pacts suggest that the same pattern will persist for at least another year. As in the case of fibers, the impact here can probably best be appreciated by looking at labor as a percent of the sales dollar. And here, too, the numbers are encouraging, indicating no significant cost pressure over the past few years. Even more impressive: The mills’ combined labor and material production expenses, again expressed as a percent of the sales dollar, are estimated to have dropped to near 67 percent. That’s far below the 85-percent-plus peak of a few years back. Nor do any of the industry’s other expense items appear to be presenting any problems. Transportation bills, for one, have remained relatively unchanged over recent years. Ditto inventory carrying charges — thanks to low inventory levels and near-zero interest rates. Moreover, add in fairly solid demand, and it’s easy to see why industry earnings have risen rather dramatically over recent years, with further improvement anticipated over the next 12 months.