Wondering how the industry’s prices are likely to fare over the next year or two? Cost trends may well provide the answer. History reveals a strong correlation between these two variables — quotes generally rising when production costs increase and falling when they begin to slip. One clear confirmation of this relationship comes from the recent sharp decline in gasoline prices when crude oil tumbled. The textile and apparel industries also provide a recent example. According to a study by Cary, N.C.-based Cotton Incorporated, the last three times cotton fiber dropped by more than 20 cents per pound over a six month period — during the 2009 business recession; the correction following the 2010-2012 price spike; and the recent 2014 falloff — the average price of cotton-containing products edged lower. There’s not that much of a time lag between these cost declines and their textile and apparel end products. According to the study, the full impact was felt in only seven months. More importantly, Cotton Incorporated analysts feel this downward industry cost-price drift will continue into late spring and summer, and even well beyond that time. This forecast is based on the likelihood of a continuing cotton glut — a glut being exacerbated by two other developments: the increasing availability of Chinese cotton, reflecting recent reforms in that nation’s stock reserve program; and large global cotton plantings because farmer returns on crops like corn and soybeans look even bleaker. Upshot: Factor in all the above, and cotton input costs are likely to remain low for quite some time, with fabric and garment prices likely to follow suit. 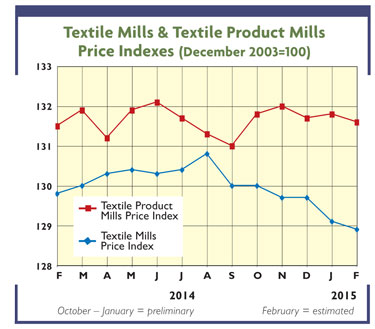 Other Costs Ease
There still are other cost slippages that could help put a lid on prices. Man-made fiber markets currently are far from firm, with Uncle Sam’s overall producer price index for these items now running fractionally under year-ago levels. All indications point to additional man-made-fiber market softness stemming from both today’s lower energy-influenced feedstock costs and continuing industry overcapacity. One thing for sure, overall fiber weakness — cotton plus man-mades — can’t be ignored, if only because this input factor accounts for 60 percent of the average base textile mill revenue dollar and about 45 percent of a typical garment. Also worth noting: Labor costs are following a similar non-threatening pattern, thanks to a combination of relatively small pay increases that are being offset or even more than offset by impressive productivity gains. Result: Average unit labor costs for the average mill or apparel manufacturer are flat or even down a bit. And this trend, too, should continue through the current year and into 2016. Finally, some relief in the transportation sector should also become apparent, with today’s significantly lower energy tabs expected to put some downward pressure on shipping bills.

Special Import Factors
The above cost-price discussion is equally applicable to textile and apparel imports. But when it comes to shipments from abroad, there are two other factors that are playing a role. First, the lower shipping costs just alluded to are a lot more important in the case of imports because of the long distances between our major overseas sources and the U.S. mainland. But equally important are international currency changes that currently are taking place. Specifically, today’s strong U.S. dollar, and conversely weak foreign currencies, are beginning to affect the cost of American purchases making them less likely to rise in price. This is especially true of China, by far our biggest overseas source. Note that the Chinese yuan, after advancing 25 percent vis-á-vis the dollar over the extended 2006-2013 period, has recently started to weaken falling about 3.5 percent since early 2014. Not surprisingly, this Chinese currency, shift as well as similar ones noted for some other big foreign suppliers, are beginning to have an effect on import quotes, with Uncle Sam’s import price index now topping out after the slow advance of recent years. This could well improve overseas suppliers’ competitive positions. As such, TW’s earlier projections calling for a slight drop in imports this year now seems less likely. A better bet: A relatively unchanged level of incoming textiles and apparel shipments.