Both cotton and manmade fiber quotes continue to resist upward cost pressure, and this could be one of the key reasons why domestic textile and apparel industry earnings are being maintained and in some cases are actually edging higher. Looking at the cotton situation first: The U.S. Department of Agriculture’s production estimates for the 2014-15 marketing year puts global output at more than 116 million bales. That’s actually a bit higher than projected a few months ago. Mill usage over this period, on the other hand, is expected to fall short of this output estimate by some 5 million bales. Result: Year-ending stocks for the new marketing year are heading for their fourth consecutive year of advance. Viewed from another perspective, the global stock/usage ratio currently is targeted to top 91 percent. That’s more than double the extremely low ratio prevailing during the 2010-11 marketing year, when prices for the fiber skyrocketed — rising to well over $2 per pound. Zero in on U.S. numbers, and this year’s anticipated stock/usage ratio should also rise — again, more than doubling the four-year earlier level. This kind of inventory buildup, plus the fact that China now holds huge excess supplies, would seem to suggest that prices likely will remain fairly shaky. Indeed, they’ve already dropped significantly over the past few months, with some further modest erosion possible through year-end and into 2015. 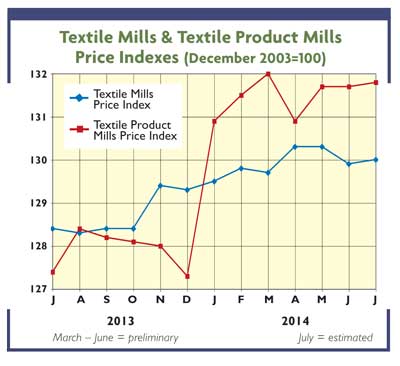 A Look At Man-mades
The market outlook isn’t all that different when it comes to key man-made fibers. Again, it’s a scenario of more than adequate capacity with little or no near-term price firming anticipated. A closer look at polyester, which by far accounts for the largest share by far of the man-made market, pretty much tells the story. At last report, global production for this synthetic textile far exceeded the amount currently being consumed. Result: The combined polyester filament and staple utilization rate at last report was put only in the low 70- to 72-percent range. More importantly, this measure of market strength is not expected to change by much over the next two years as new capacity coming on-stream limits any significant improvement in operating rates. Best estimate for 2016: only a small polyester capacity utilization creep up to about 72 to 74 percent. And similar supply-demand imbalances are apparent when looking at most other man-made fibers. Given this scenario, Textile World editors see pretty much smooth sailing when it comes to near-term manmade fiber costs, not only for polyester, but also for other major constructions like acrylics, nylon and rayon. It also might be pointed out that there is still another price-rise inhibitor operating, namely the fact that man-made fiber feedstock costs — mainly petrochemicals — also are expected to hold fairly steady. To sum up: The near stability of man-made tags that has prevailed for more than 30 years now —they’ve risen less than 1 percent annually over this period — is likely to continue. As such, TW’s beginning-of-year forecast calling for only fractional increases in these costs can now be extended out to 2015 and perhaps even into 2016.

The Industry Impact
As noted above, these fiber cost trends are having significant positive repercussions on domestic industry health. And with good reason — namely because fiber procurement makes up a huge part of the average textile mill and apparel manufacturer sales dollar. This year, TW editors figure that fiber costs for mills making basic fabrics will account for about 51 percent of each dollar of product shipped. To be sure, that’s still a hefty chunk. But it’s a lot less than the huge near-70-percent-share noted in 2011, when cotton costs went through the roof. Similar declines in material costs per sale dollar are also noted for more highly fabricated textile mill products like carpets and home furnishings, with this year’s estimated material bite expected to run well under the 65-percent peak level recorded a few years back. Nor are things all that different in the apparel sector, where the 45 percent currently being earmarked for material needs remains well under the 3-year-earlier 62 percent reading. The implications of all this are pretty clear: Not only have these declines in the textile and apparel industries’ major cost outlay helped to holster profits and margins (see “Business & Financial,” TW, July/August 2014), but they have also helped keep textile and apparel prices at relatively unchanged levels — levels that remain extremely attractive to today’s cost-conscious consumers.