Most economists are now predicting solid business growth this year. But there are still a few doubters — with some contrarian pundits continuing to cite such concerns as rising interest rates, lingering tax and spending uncertainties, overseas economic problems, and — last but not least — the still-huge U.S. trade deficit. The big question: Are these concerns realistic? Textile World editors think not. Take the question of interest rates. True, the Federal Reserve Bank is in the process of ending its quantitative easing policy, which has kept borrowing costs at record low levels. But these same financial managers have also been making it amply clear that any near-term interest rate hikes will be quite small — primarily because the falling jobless rate being cited as evidence of a strong recovery is flawed. Reason: Much of the noted decline reflects the fact that many of the jobless have stopped looking for work and hence are no longer considered unemployed. Better, says the Fed, to focus on a more meaningful employment barometer, the labor participation rate — the number of people with jobs relative to the overall working-age population. Zero in on this more sensitive yardstick, and you find a disappointingly low reading — far under the levels of the last few decades. Upshot: The Fed is set to move cautiously. Best bet: Only fractional percentage-point boosts in interest rates — far too small to have any real braking impact on either housing or the purchases of textiles, apparel and other consumer goods. 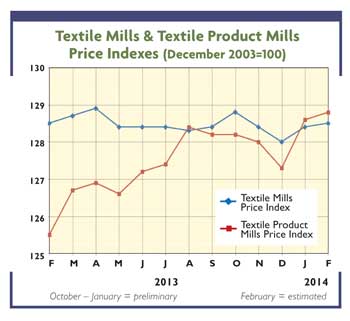 GDP Question Marks
Nor are any new moves on the government spending and tax fronts likely to have serious negative impacts on domestic business activity. True, there’s going to be a lot of political posturing over the next few months as the mid-term elections approach. But, given the negative political fallout of last year’s congressional brawls, both political parties aren’t very likely to precipitate any 2014 crisis. Conclusion: No repeat of last year, when fiscal restraints managed to knock upwards of a full percentage point off gross domestic product (GDP) totals. In short, current projections calling for 3-percent or slightly higher economic growth look pretty solid for the current year.

Further bolstering this positive outlook is the current strength in the all-important auto market. Right now, the consensus is that some 16 million light vehicles will be sold this year — with strength coming from higher incomes plus the fact that so many consumers postponed the purchase of a new car during the recent recession. Still another currently voiced worry that needs some debunking is the fear that today’s emerging-country currency crisis will put a brake on the U.S. recovery. The point here is that these currency problems are limited to just a few poorly governed countries like Ukraine and Argentina. In any event, most economists see only a remote possibility of any major global business crisis developing over the next few quarters.

Lingering Trade Concerns
Another nagging problem is the still-huge U.S. import-export trade deficit. But here, too, fears seem to be grossly exaggerated. That’s primarily because two of the deficit’s major contributors — crude oil and textile/apparel products — seem to be becoming more manageable. On the petroleum front, domestic oil production, thanks to recent fracking breakthroughs, is showing significant increases. Not surprisingly, energy imports have begun to decline by substantial amounts. Turning next to the textile and apparel trade deficit: contributions to overall negative trade numbers seem to be plateauing out. Indeed, there is now evidence that this key portion of the U.S. trade imbalance may actually be ready to shrink a bit. Some of the factors behind this improving outlook would have to include a narrowing U.S.-foreign production cost differential; increasing interest in U.S.-made goods, rising shipping costs and more U.S. producer interest in reshoring. Summing up — smaller textile, apparel and petroleum trade imbalances would clearly seem to portend progress in narrowing the overall trade deficit — and with good reason. Well over half of the overall red-ink trade figure can be attributed to textiles/apparel and petroleum — 17 percent in the case of textiles/apparel, and near 40 percent when it comes to petroleum. Bottom line: A shrinking trade imbalance — not only for 2014, but also through the foreseeable future.