The latest government numbers on prices, imports and industry capacity are providing some modestly
encouraging news for U.S. textile and apparel manufacturers. Looking at prices first: Rising quotes
in recent months have helped offset some bottom-line pressures stemming from the recent run-ups in
cotton and other costs. Clearly, the impressive 13-percent increase in the price of basic mill
products such as yarns and fabrics over the past 12 months can’t be underestimated. In the greige
goods subsector, there’s a 17-percent jump. To be sure, advances in more highly fabricated mill
products haven’t been quite as large. Nevertheless, the increases here — 7 percent for both carpets
and home furnishings — have been enough to at least narrow the cost-price squeeze. Even the
extremely competitive apparel sector has managed to eke out a modest 4-percent increase over the
past year. True, not all the above price boosts are all that big, and overall increases haven’t
been nearly enough to prevent some profit erosion. However, they do mark a major change from the
previous decade or so, when textile/apparel price averages inched up at a less-than-1-percent
annual rate. More important, today’s higher tags have helped buffer domestic mills and clothing
manufacturers from any significant losses. Indeed, combine expectations of continuing relatively
firm prices with the current sharp drop-off in cotton costs, and industry earnings could well begin
to head higher again — if not this quarter, then certainly by early next year. 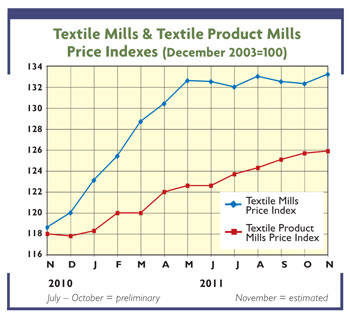 
Other encouraging signs come from gradual changes taking place in U.S. imports of textile
and apparel products. First, there’s this year’s small decline in incoming shipments. Based on
latest data, volume totals look to be down about 1.5 percent. While hardly huge, it marks a vast
improvement over the big increases posted over the past decade or so, when a steady tattoo of
double-digit annual gains pretty much decimated many U.S. mills and factories. Credit the slowdown
to a variety of factors: the fact that foreign producers already have captured virtually all
vulnerable U.S. markets; a modest narrowing in the overseas cost advantage; and increasing
sophistication on the part of U.S. firms, which have become a lot more savvy in producing and
marketing their products. Equally important for the U.S. industry’s continued health is a shift in
overseas sourcing away from China and other Far Eastern nations and more toward Western Hemisphere
sources. This year’s imports from China look to be off by about 2.5 percent, while incoming
shipments from the Americas are up about 2 percent. This kind of change in sourcing should help
increase demand for U.S. mill products. Indeed, that could be one reason why, despite the sluggish
economy, domestic mill shipments of these products are running more than 4-percent above 2010
levels.


The fact that shrinkage in U.S. textile/apparel production potential has been slowing down
can also be regarded as an indication of better days ahead. According to latest government
statistics, mill capacity has been dropping only about 2.5 percent annually since 2009 — close to
half the 4.5-percent annual decline reported over the previous six years. And this changing pattern
is even more pronounced in the apparel sector, where the 2-percent annual declines over the past
few years are not even within shooting distance of the 8-percent-per-year slippages reported over
the 2002-09 period. This new flattening out in the textile/apparel capacity curve is occurring at
the same time many companies are continuing to close down their older, more obsolete facilities. Do
the math and it’s clear something else is being added to replace these shutdowns. And that
something is new plant and equipment, which

Textile World
now estimates at the mill level is coming on-stream at near a $1 billion-a-year clip –
the equivalent of 2 cents of every mill sales dollar. And the picture is even more encouraging in
the apparel sector, where capital spending per dollar of sale is nearly 2.5 percent. If nothing
else, this continuing investment seems to suggest that U.S. companies are fairly confident about
their industries’ future. Indeed, it’s part and parcel of their overall strategy: The building of a
leaner and meaner industry — one ready, willing and able to compete in today’s dog-eat-dog
marketplace.