T
he year is ending on a rather dismal note. To be sure, consumers are still buying apparel
and other holiday gifts. But, by and large, the number of purchases are fewer and generally cost
considerably less than previously anticipated. In any event, it’s shaping up as the weakest
Christmas season in decades. The result: more downward revisions in our November/December
big-picture business forecast — from the very modest overall retail gain predicted a month or two
ago to perhaps a sizable decline. Some recently released surveys would seem to confirm this
basically downbeat outlook. A few weeks ago, for example, the Hay Group, a big consulting firm,
queried the 40 largest retailers, and the results were pretty sobering: Three out of five said they
expected November/December sales to be no better than flat, with many of the remaining respondents
anticipating declines as high as 15 percent. It’s all in sharp contrast to a similar September
survey, when the majority of retailers were talking in terms of a 5- to 10-percent jump in holiday
sales. The story is much the same when viewed from the consumer perspective. The NPD Group, for
example, finds 25 percent of queried families planning to spend less this Christmas — more than
double the number feeling they’d be spending more. And as might be expected, declines cover all
goods, including many domestic textile and apparel products. As such, mill shipments — already down
8 percent over the first nine months — could be off by as much as 10 percent by year end. That
would be the industry’s worst performance in nearly a decade. 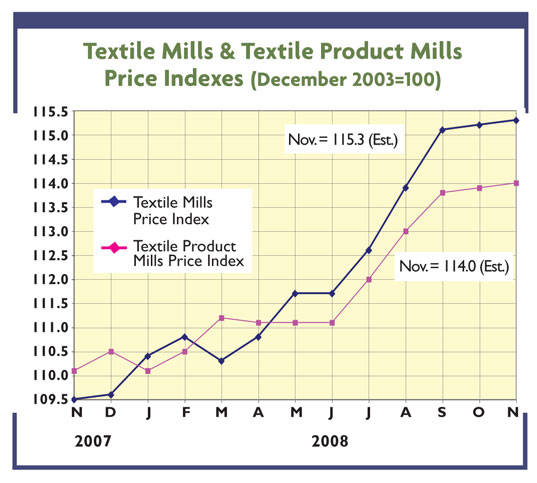 
Nor is it likely that the next few quarters will see any appreciable textile turnaround.
True, all the fiscal and financial aid being funneled into the economy by Washington should have
some positive effect. But it will all take time, especially with consumer confidence still near an
all-time low. While making any pinpoint predictions under these conditions is risky,

Textile World
editors feel that general business activity will continue to decline, though hopefully at a
less precipitous pace. And again, this will be having a negative effect on textile and apparel.

TW
’s best bet: another 3- to 5-percent slippage in textile production and shipments through
next June. After that, if all goes well, a more significant industry bottoming-out could be in the
cards. But to achieve this, US officials will also have to keep a sharp eye on imports — especially
from China, where fears of a similar-to-US downturn has halted an further upward revaluation of the
nation’s currency — the yuan — and resulted in increased Beijing rebates on taxes charged to their
textile, apparel and other exporters. More importantly, Washington’s top priority has to be put on
effecting extensions on still-existing Chinese export curbs — caps that are targeted to expire at
the end of the current year. One hopeful sign: The incoming Obama administration has been hinting
it might be somewhat more willing to protect US industries. So has the new Congress, many members
of which were selected on the promise to further level the still badly distorted international
trade playing field.

A Few Other Positives


There’s also a modicum of additional good news to balance out all of today’s gloom and doom.
For one, despite all the recent declines, the US textile and apparel industries are still managing
to turn a profit. True, earnings and margins are down when compared to last year — but not any more
than many other key US industries. Indeed, our mills seem to be faring a lot better than some other
hard-hit sectors like autos and big-ticket appliance lines. Credit here has to go to increasingly
savvy textile/apparel management personnel. They’ve helped avoid a major crisis by forging new
global alliances, coming up with continuing new and improved products, reacting quickly to changes
in consumer tastes, and last, but not least, cutting costs. This improving cost performance has
also been aided by the recent tumble in cotton prices — from a peak of near 80 cents per pound
earlier this year to only around 40 cents per pound at latest report. Much of this fiber drop can
be traced to the worldwide economic crisis. But basic supply/demand forces are also playing a role.
More to the point: Global consumption this year, according to Cotton Incorporated estimates, could
actually show a fractional decline — enough to keep overall supplies, as measured by the stock/use
ratio, at relatively high levels. And there’s even some hope for lower costs in the other major
fiber sector — man-mades. True, quotes here are still running considerably above a year ago. But
this, too, should change on a combination of slower demand, excess capacity, and sharply reduced
petroleum-based feedstock costs engendered by the recent huge declines in crude oil tags.