T
he battle to stem the Chinese import tide continues — with moves and countermoves on both
sides still making it hard to pinpoint the final outcome. Complicating the issue: Chinese textile
and apparel companies have clearly overinvested in new factories and have hired large numbers of
workers to run these operations.

Beijing cutbacks could prove quite painful financially and politically. On the other hand,
most analysts remain convinced some accommodation eventually will be reached that will help reduce
some of the pressure on our domestic textile and apparel mills.

It’s in the interest of both parties to avoid any major confrontation.

A possibility: something in the order of the recent China-European Union deal, whereby both
sides agreed to set limits on 10 categories — with annual shipment gains of these products set
between 8 and 12.5 percent a year. Other options include Beijing moves toward higher export
tariffs, reduced industry subsidies and upward revaluation of the yuan.

The big question is, just how much revaluation? It’s highly unlikely China will agree on the
25-plus-percent figure many feel is needed. On the other hand, some action seems certain. US
Treasury Secretary John Snow feels Beijing will make a long-anticipated move on this score by
mid-October, when the US Treasury is expected to deliver a report on world currency manipulation.
Many feel the yuan may be boosted by as much as 10 percent before the end of the year. Such an
upward move could well be accommodated by Beijing. One recent study by the Asian Development Bank
suggests such action would show China’s willingness to compromise and would help stabilize China’s
overheated economy.

But, on a more sobering note: Don’t expect miracles from a 10-percent currency move. It
probably would have only a minor impact on our overall trade deficit, because US imports of all
products from China make up only about 15 percent of total incoming shipments, and any Chinese
import slippage would probably lead to increases from other countries. 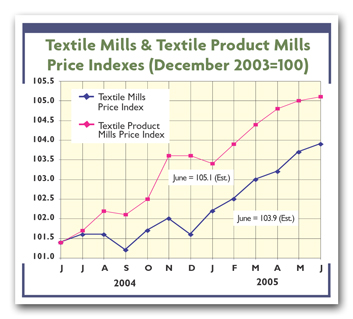 Nor are Chinese textile imports likely to be cut much by a US-Beijing agreement. US buyers
continue to emphasize China’s role as a sourcing location will simply be too attractive to ignore —
and trade barriers aren’t going to stop that country from being the top garment-maker in the world.
Indeed, despite all the current uncertainties, many buyers are already laying the groundwork for
more Chinese gains — noting that World Trade Organization safeguard rules expire in 2008.

What’s more, importers could have more leeway as early as next year — since quotas imposed in
2006 would be calculated from a larger base that takes into account sharp early 2005 Chinese
increases.

In any case, China’s sourcing advantages are overwhelming. Not only are its average labor
costs 90 percent under US costs, but new investment (some $3.5 billion in new textile equipment was
shipped last year) means its manufacturers can stitch garments faster than those in other low-cost
countries such as India and Vietnam. Then, too, the country’s sheer size makes it a desirable base
for garments that need to be produced in large volume.

Second-half 2005 may not turn out to be all that bad. Consumer confidence and spendable income
levels are still on the rise, suggesting recent gains in overall textile and apparel purchases will
continue. Also encouraging is the fact that current industry import increases haven’t been much
greater than last year — with year-to-date gains put at only 8 to 10 percent above comparable 2004
levels. If nothing else, it indicates the huge Chinese influx is being offset considerably by a
drop-off in incoming shipments from other overseas suppliers. As well, domestic textile shipment
totals this year have pretty much been holding at comparable 2004 levels. Even if some second-half
declines are factored in, the year isn’t likely to turn out to be a total disaster. Backing this
up, projections by economic forecasting firm Global Insight call for a modest 4-percent real
decline in basic mill product shipments for 2005. Even this will be partially offset by a
0.7-percent gain in textile mill products.