F
oreign trade uncertainties continue to dominate the overall industry picture. Will US
mills be successful in having Uncle Sam consider petitions to curb imports of foreign products?
What kind of upward revaluation in Chinese currency (the yuan) can we expect? How will the Central
American Free Trade Agreement (CAFTA) eventually play out?

Most mill executives are worried, fearing CAFTA as currently negotiated will give China a
backdoor entry into our market — primarily by allowing Central American garment makers in certain
cases to use foreign-made fabric and still send finished clothing to the United States duty-free.
Some administration officials say this fear is overblown, noting that smuggled fabric shouldn’t
prove to be a problem since less than 9 percent of the fabric content of US CAFTA clothing imports
over the past year consisted of foreign-made material. They also argue that CAFTA garment makers
will have a greater incentive to stay in the Western Hemisphere and thus make them more likely to
use US-made textiles. 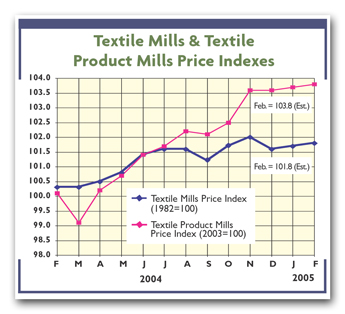 These uncertainties are beginning to have some effect on clothing tags, making US importers
think twice or maybe even three times before putting all their eggs in the super-cheap Chinese
basket. The 15- to 20-percent decline in garment prices predicted last fall is not materializing.
There have been some spotty weaknesses, but as of today, there’s precious little evidence of any
big tumble.

The currency question mark is having its effect, for any upward yuan revaluation would make US
imports from China more expensive. The Chinese have been under mounting pressure to correct the
exchange rate imbalance. No one expects the big 35- to 40-percent upward revaluation some say is
needed, but most economists are convinced some slow, steady increase in the yuan’s value is
inevitable as the year wears on. Other price-firming factors that may be playing a near-term role
include previously unmentioned US quota and CAFTA uncertainties, new retailer attempts to shore up
badly depleted margins, rising oil and other raw material costs, rising shipping costs, attempts to
improve quality rather than cut prices, and even some concerns that today’s swift Chinese expansion
could lead to some production bottlenecks in that country.

Demand seems to be holding up. Latest government data show mill production and shipments remain
pretty much at year-ago levels — a lot better than the declines of other recent years. A new
Institute for Supply Management survey suggests this pattern is continuing into early 2005. Part of
this leveling off can be traced back to the trade questions discussed above. Equally important,
however, is today’s still improving macro-economic picture. Most analysts project 3.5-percent gross
domestic product growth for the year as a whole. Add in a slowdown in productivity gains, and this
could mean the addition of about 200,000 jobs per month. This should probably be enough to permit a
nearly 5-percent increase in wage and salary income — more than enough to keep consumers in a
spending mood. As such,

TW
now sees apparel sales rising another 4 percent or so this year — hitting a peak of nearly
$180 billion. This extra spendable income would also seem to assure further gains.

Upshot: 2005 textile mill activity, despite all earlier gloom-and-doom talk, may yet end up
pretty close to overall 2004 levels.

Thanks to new government data, the Textile Mill Products Price Index is being revised by
splitting it into two subsectors. One reflects trends in basic textile mill prices. The other
traces price performance in the more highly fabricated textile product mills sector. This permits
comparison with similar breakdowns that were made available in other such textile areas as
employment, earnings, sales and inventories. While both new price measures show little upward
movement over the past year, performance has generally been a bit more robust in the textile
product mills sector, where foreign competitive pressures haven’t been quite as severe.