T
he year isn’t ending on too bad a note. Overall production and shipment figures continue
to bottom out, with little or no significant change noted over the past few months. And there are
even a couple of bright spots.

For one, the Institute for Supply Management again has textiles on its list of industries
reporting a rise in activity. A few fabric sectors — including high-end offerings, stretch types
with spandex, and denims that sport new looks and washes — also are doing tolerably well.

Equally encouraging are the fairly solid gains in the more highly fabricated textile product
category. Much of this is centered in carpets and rugs, which are being bolstered by strong housing
and home improvement activity. This segment also has been holding up over the long pull — with
aggregate domestic production running close to 7 percent above 1997 levels. Still another sign of
this relatively healthy sector — fairly firm prices. At latest count, prices. Most other quotes
remain somewhat sluggish. The spotty signs of overall firming seem to have disappeared. Indeed,
both greige goods and finished goods actually have been a bit on the shaky side over the past few
months. Result:

Textile World
’s all-inclusive price index for basic textiles isn’t significantly above where it was a year
ago; and there’s little to suggest any improvement in this key price yardstick over the next few
months.

Luckily, this textile softness is accompanied by equally sluggish fiber quotes. And the
industry has managed to avoid any widening cost-price squeeze. Cotton, recently in the low 40
cents-per-pound range, is a prime example. These low quotes are in sharp contrast to the 70
cents-per-pound and higher levels prevailing last fall. Nor have man-made tags shown any great
strength — certainly not nearly as much as would be suggested by the huge runup in petroleum. 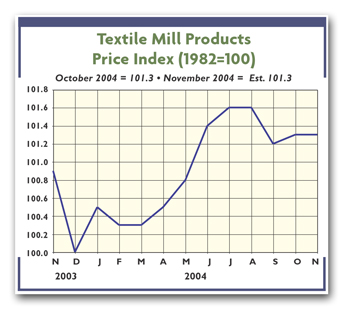 
There’s growing uncertainty on what’s going to happen over the upcoming year when import
quotas are eliminated. The big question marks: How hard will the United States press to put a lid
on incoming totals, and how will China respond?

Washington now seems a bit more receptive to the petitions of a coalition of US trade
associations to invoke trade law provisions limiting import growth. Some requests are already under
study, and more such petitions are anticipated.

In any event, the White House will probably have to make some decisions by late January.
Right now, it seems highly unlikely that such petitions will be entirely rejected. More likely, the
government will try seeking a deal with China to avoid a major trade fight. One possible solution:
having China agree to limit exports to the United States voluntarily — similarly to what occurred
in the 1970s when Japanese autos were flooding the market.


Close monitoring will also be in order on what happens to the value of the Chinese yuan.
There’s pretty much unanimous agreement that the currency is grossly undervalued, thereby making
Chinese exports of textiles and other products unfairly competitive. How much undervalued and what’s
likely to be done about it are questions that still remain unanswered. Some domestic textile
executives put the undervaluation as high as 30 to 40 percent. But few expect the Chinese to agree
to any such huge upward revaluation.

On the other hand, there’s increasing belief the Chinese will at least make partial moves
toward revaluation. Some officials there have already signaled their readiness to relax the yuan’s
tight peg to the dollar.

Commenting on this, Frank Gong, JP Morgan’s chief economist for China, sees about a
7-percent appreciation of the yuan by a year from now. A similar figure is mentioned by a top
Chinese official, who feels the state-owned companies in his country could withstand a 7- to
10-percent increase in the yuan’s value without too much harm.