T
here are still precious few signs of any meaningful textile pickup. To be sure, basic
indicators such as new orders, production and shipments have bottomed out. But for the most part,
they still remain well under the peaks of a few years back.

Textile production is a case in point. Latest levels, while basically unchanged from 12
months ago, are running a significant 22 percent under three years ago, when the recent industry
slump first began.

The picture is much the same on the price front, where average textile tags are no higher
than they were three years ago — in sharp contrast to the overall 6- to 7-percent increase in
overall inflation over the same period.

And what’s true of these textile averages also holds for major subgroups. Thus, tags for
such key areas as greige goods, finished fabrics, home furnishings and carpets are all within 1
percent or so of where they were a year ago. Blame it on continuing competition — not only from
imports but also from domestic mills, where excess industry capacity (operating rates are currently
only in the very low 73-percent range) continues to put strong downward pressures on most prices. 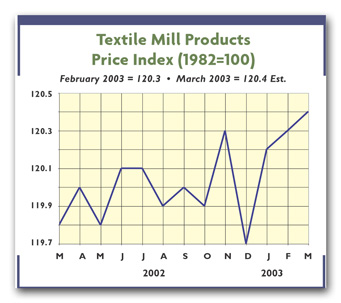 
Meantime, there’s both good and bad news on the textile cost front. On the plus side, worker
outlays per unit of output are declining. On the other hand, fiber costs are beginning to creep up.

The latest labor data suggest hourly wages of textile workers have risen only a very modest
2.4 percent over the past year. But to get the real impact of this, it is necessary to factor in
worker productivity (as measured by output per employee), which has been advancing by close to 5
percent over the same period.

Conclusion: The industry’s unit labor costs have actually been edging a bit lower — probably
by something in excess of 2 percent. More important, this encouraging trend is likely to persist
over the next few years. In any event, textiles are now more than holding their own with other
industries in the race to remain competitive in today’s hotly contested world markets.


Somewhat less encouraging is the trend in the industry’s other key cost input — fibers. This
is especially true in the case of man-mades, where hefty increases in petrochemical feedstocks are
starting to translate into fiber price increases. But these advances aren’t likely to hurt the
domestic industry’s global competitive position because overseas producers who make these man-mades
are facing the same upward cost pressures.

In any case, hikes are already beginning to appear — with several firms already announcing
relatively impressive 15-percent or higher boosts for polyester. Acrylic staple is also being
targeted for an increase. And there could be more if oil prices don’t come down significantly. One
thing for sure, it’s unrealistic to expect a repeat of the last 12 months, when man-mades averages
remained fairly stable.

Nor do natural fibers seem exempt from increases. Wool averages are up vis-à-vis a year ago.
And in recent months, cotton has been as high as 55 cents per pound — far above the near 35 cents
per pound levels of a year ago. But no one expects a rerun of the runup a few years back. Instead,
the feeling is that this key fiber will leave off, provided this year’s new crop is anywhere near
normal.

A Few Signs Of Better Days Ahead


Despite all of today’s Middle East problems and uncertainties, the basic long-run prognosis
for the textile industry isn’t all that bad. Textile executives still are willing to spend in the
hopes of future payoffs. How else to explain the fact that industry capacity has remained
relatively unchanged over the past year — as new plants and equipment coming on-stream offset the
rash of recent shutdowns of older, less efficient facilities.

The recent interest in acquiring Burlington Industries also would seem to attest to a viable
textile future. Interestingly, savvy investor Warren Buffett — someone who rarely makes a mistake —
was one of the active bidders for the big textile firm. Still other encouraging signs are suggested
by the continuing introductions and innovations designed to both whet buyer appetites and
differentiate mill offerings. Most of the attention these days seems centered on fabrics with
special surface effects — those that resist wrinkling, stains, perspiration and odors. Then there’s
the appeal of renewable fibers like Cargill Dow’s Ingeo™. Some 85 firms (including mills, fiber
producers and spinners) are already said to be actively engaged in its development.